How Can Biomolecules Improve Mucoadhesion of Oral Insulin? A Comprehensive Insight using Ex-Vivo, In Silico, and In Vivo Models

Epidermal fish mucus comprises of diverse bioactive metabolites which plays an immense role in defense mechanisms and other important cellular activities. Primarily, this study aims to screen the unexplored mucus extract of Puntius sophore (P. sophore) for its antagonistic potential against common pathogens, which are commonly implicated in foodborne and healthcare associated infections, with effects on their adhesion and biofilm formation. Profiling of the skin mucus was carried out by High Resolution-Liquid Chromatography Mass Spectrometry (HR-LCMS), followed by antibacterial activity and assessment of antibiofilm potency and efficacy on the development, formation, and texture of biofilms. Furthermore, bacterial cell damage, viability within the biofilm, checkerboard test, and cytotoxicity were also evaluated. As a result, P. sophore mucus extract was found to be effective against all tested strains. It also impedes the architecture of biofilm matrix by affecting the viability and integrity of bacterial cells within biofilms and reducing the total exopolysaccharide content. A synergy was observed between P. sophore mucus extract and gentamicin for Escherichia coli (E. coli), Pseudomonas aeruginosa (P. aeruginosa), and Bacillus subtilis (B. subtilis), whereas, an additive effect for Staphylococcus aureus (S. aureus). Thus, our findings represent the potent bioactivities of P. sophore mucus extract for the first time, which could be explored further as an alternative to antibiotics or chemically synthesized antibiofilm agents. View Full-Text
Keywords: Puntius sophore; antibiofilm; antiadhesion; antibacterial; biofilms; bioactive molecules; exopolysaccharide; antimicrobial peptides; HR-LCMS Puntius sophore; antibiofilm; antiadhesion; antibacterial; biofilms; bioactive molecules; exopolysaccharide; antimicrobial peptides; HR-LCMS
►▼ Show Figures 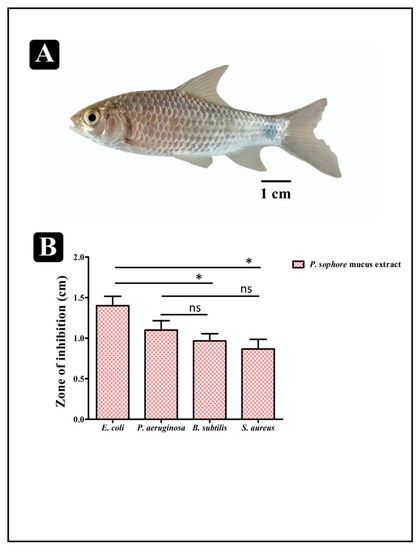