A β-lactams that act by inhibiting the bacterial cell wall biosynthesis are one of the most common classes of antibiotics applied to suppress the growth of latent bacterial infection associated with the plant tissue culture, as well as in the Agrobacterium-mediated transformation techniques. Plant sensitivity to antibiotics usually is species-, genotype-, or even tissue-specific and mainly depends on concentrations, growth conditions, and culture system. In the presented article, we estimated a comparative effect of four β-lactam antibiotics (Claforan®, timentin, amoxicillin, and Amoxiclav®) at different concentrations in an agar-solidified Murashige and Skoog (MS) culture medium supplemented with 5 mg L−1 6-benzylaminopurine (6-BA) and 0.1 mg L−1 indole-3-acetic acid (IAA) on in vitro callus induction and shoot organogenesis from hypocotyl and cotyledon explants of two tomato cultivars (Rekordsmen, Moryana). The role of clavulanic acid in combination with amoxicillin (Amoxiclav®) in the shoot organogenesis frequency and number of shoots per explant has been demonstrated. Additionally, the growth inhibition of Agrobacterium tumefaciens AGL0 strain according to agar disk-diffusion assay was studied. As a result, both stimulatory (timentin, amoxicillin, and Amoxiclav®) and inhibitory (Claforan®) effects of β-lactam antibiotics on in vitro morphogenetic responses of tomato were noted. It was found that clavulanic acid, which is part of the commercial antibiotic Amoxiclav®, significantly increased the shoot regeneration frequency from cotyledon and hypocotyl explants of Rekordsmen tomato cultivar. Possible reasons for the stimulating effect of clavulanic acid on the induction of shoot organogenesis are discussed. According to agar disk-diffusion assay, the maximum diameter of growth inhibition zones (43.9 mm) was identified using 200 mg L−1 timentin. The in vitro antibacterial activity of tested β-lactam antibiotics was arranged in the following order: timentin > Claforan® > amoxicillin ≥ Amoxiclav®. Thus, to suppress the growth of internal and latent bacterial infection of tomato plant tissue culture, as well as for transformation of Moryana and Rekordsmen cultivars by A. tumefaciens strain AGL0, we recommend adding of 100–200 mg L−1 timentin or 400–800 mg L−1 Amoxiclav® to the shoot induction medium. View Full-Text
Keywords: Solanum lycopersicum L.; Claforan®; timentin; amoxicillin; Amoxiclav®; clavulanic acid; callus induction; shoot regeneration; agar disk-diffusion method Solanum lycopersicum L.; Claforan®; timentin; amoxicillin; Amoxiclav®; clavulanic acid; callus induction; shoot regeneration; agar disk-diffusion method
►▼ Show Figures 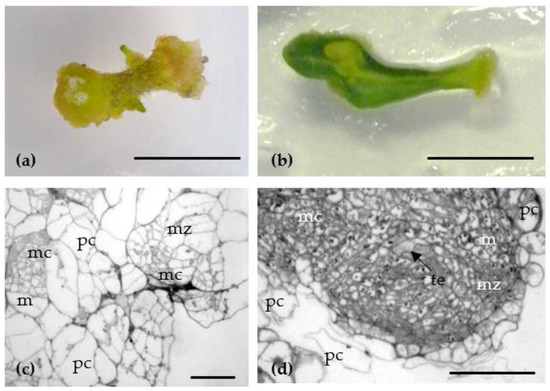