Biosensors for Detecting Lymphocytes and Immunoglobulins

:
Within microfluidic technologies, the centrifugal microfluidic “Lab-on-a-Disc” (LoaD) platform offers great potential for use at the PoC and in low-resource settings due to its robustness and the ability to port and miniaturize ‘wet bench’ laboratory protocols. We present the combination of ‘event-triggered dissolvable film valves’ with a centrifugo-pneumatic siphon structure to enable control and timing, through changes in disc spin-speed, of the release and incubations of eight samples/reagents/wash buffers. Based on these microfluidic techniques, we integrated and automated a chemiluminescent immunoassay for detection of the CVD risk factor marker C-reactive protein displaying a limit of detection (LOD) of 44.87 ng mL−1 and limit of quantitation (LoQ) of 135.87 ng mL−1.
Keywords:
lab-on-a-chip; centrifugal microfluidics; lab-on-a-disc; siphon valves; cardiovascular disease; chemiluminescence; immunoassay

In addition to these layers, permanent magnets (S-03–06-N, Supermagnete, Gottmadingen, Germany) are embedded (mechanical fit) into the base layer to provide a point of agglomeration for the paramagnetic beads. Additionally, a loading hole for reagent removal (located in the vent layer) is sealed with adhesive tape. DF tabs were assembled, as described previously [38], from gas-tight, water-dissolvable film (KC-35, Aicello, Aichi, Japan). These tabs take approximately 30–40 s to dissolve in water at room temperature [38] and provide a short time delay between wetting of the DFs in the waste chamber and release of the next reagent.
The layers from which the cartridges were assembled were cleaned prior to assembly. This protocol includes washing the PMMA in dilute Micro-90® Concentrated Alkaline Cleaning Solution (International Products Corporation, Burlington, NJ, USA) twice (20-min sonication at 60 °C), followed by washing in deionized (DI) water twice (20-minute sonication at 60 °C), and air drying in a HEPA-filtered assembly room [50,59]. PSA layers were prepared for assembly under sterile conditions; here, the liners are only removed in a High-efficiency particulate air -filtered (HEPA-filtered) cleanroom. The discs were assembled manually on a custom alignment jig. Between addition of each layer, the discs were rolled at least 12 times (three times and four orientations) using a high-pressure laminator (HL-100, Cheminstruments, Fairfield, OH, USA).

The discs were characterized on a centrifugal ‘test stand’ [29]. Here, a computer-controlled spindle motor (FESTO, Esslingen, Germany) was synchronized with an externally triggered CCD camera (Pixelfly, PCO, Kelheim, Germany) and strobe light (BVS II, Polytec, Waldbronn, Germany) so that each image was acquired at the same angular position. Therefore, the disc appeared stationary while rotating at even up to 60 Hz. The motor was controlled by custom software (LabVIEW), which enabled programming a spin profile (Figure 4 and Figure 5).

Prior to their loading to the disc, the magnetic beads were prepared on-bench with the capture antibody according to the protocols described in Section 2.5.
Prior to being placed on the centrifugal test stand, each disc cartridge had two neodymium magnets placed in precut holes behind the incubation chamber. Next, each reservoir was loaded with 90 µL of a specific reagent, corresponding to a step of generic immunoassay. On-disc reservoirs were filled according to Table 2. R2 contained the specific CRP standards at differing concentrations (80, 40, 20, 10, 5, or 2.5 ng mL−1), depending on the concentration of standard being tested. R8 was left empty during assay testing to enable off-disc measurement. See also ESI.

A pre-programmed protocol was executed unsupervised on the centrifugal test stand. Mixing cycles refer to the number of times the disc was accelerated between 20 Hz and 40 Hz to induce advective mixing. Note the chemiluminescence substrate was not loaded on-disc.
After completion of the automated spin protocol, the disc was removed from the test stand and the magnets were removed from the underside of the disc. Next, the scotch tape was stripped from over the incubation chamber. Then, 60 μL of 0.1M PBS was pipetted into the incubation chamber and the magnetic beads were suspended in the buffer. The buffer and beads were then pipetted from the disc and transferred to a well plate. A magnet retained the beads while supernatant was extracted. Next, 90 μL of 0.1M PBS was loaded into the microtiter plate for resuspending the beads. Under low-intensity illumination, 100 μL of Pierce™ ECL Western Blotting Substrate reagent was added to each the well on the well plate and chemiluminescent signal was measured on a luminometer (GloMax Microplate Luminometer, Promega, Madison, WI, USA).

Images of the operation of this microfluidic architecture, acquired from the test stand, are shown in Figure 5. Video showing the full sequence of valve actuation (albeit, with shortened incubation times and using colored water for better visualization) is provided in ESI Video S1 and ESI Video S2. Videos were post-processed as described in ESI. As can be seen in Figure 5, this microfluidic architecture allowed complete control of incubation times through altering the spin rate to open the valves. The architecture proved to be extremely reliable. Once the manufacturing process was established, 18 of 21 discs functioned as expected under automated control of the spindle motor (Figure 6b). The on-disc CRP assay was completed (n = 3) at six different concentrations and a limit of detection (LoD) of 44.87 ng mL−1 and limit of quantitation (LoQ) of 135.87 ng mL−1 were established.

The efficacy of this disc architecture to implement paramagnetic bead-based chemiluminescent immunoassays for CRP was established. The clinical range of interest for CRP is between 3–80 μg mL−1 for adults, and, in the case of neonatal sepsis, as low as 0.08 μg mL−1 [9]. In this work, we demonstrated the capability to detect as low as 44.87 ng mL−1 in buffer. Typically, in a diagnostic test, plasma or serum is isolated from whole blood and then diluted by a defined ratio. This ensures the assay can deliver results in the clinically relevant range while not delivering a signal at saturation. This dilution also improves the accuracy of the assays by diluting components of blood, which may inhibit the assay performance. Implementing this full protocol on disc, including dilution of sample, will be subject to future work. Indeed, integration of this microfluidics architecture with wireless chemiluminescent sensing [74] offers the potential to provide for full sample-to-answer automation of the assay on a compact laboratory instrument.
Figure 6b shows measurements across a range of concentrations with both standard and optimized incubation times. These parameters were then used on disc and reduced the overall assay time from over 2 h to approximately 55 min. These same incubation times were then used for the on-disc protocol. However, while measured on the same laboratory instrument, the signals measured from the beads processed on disc were significantly lower than those processed on bench (Figure 6).
We identified two potential causes of this reduced signal. In the first, the removal of beads from the disc for measurement can result in loss of material. This loss may be mitigated through integration of chemiluminescence measurement into the test-stand instrument [74]. The second problem concerns the use of magnetic beads which, in this implementation, are pulled to the surface by permanent magnets embedded into the underside of the disc. Ideally, this would create a monolayer of functionalized beads to replace an antibody-coated surface [78,79]. A particular advantage of using magnetic beads is the potential to use the same disc architecture against different antibody targets. However, we believe the use of permanent magnets caused unfavorable agglomeration of magnetic beads and, despite rigorous mixing, leaving significant percentage of beads underexposed to sample and/or to detection antibody. This effect may be mitigated through use of an electro-magnet rather than permanent magnets. This would permit the beads to mix freely with the sample/reagents during the incubation steps. Alternatively, the PMMA surfaces inside the disc might be directly functionalized to provide a defined surface for detection [80].
The results presented above clearly demonstrate the capability of this microfluidic architecture to enable biological protocols that require extended incubation periods (i.e., of the order of 20 min and total assay times of more than an hour). This capability allowed us to decouple the timing of release of event-triggered valves from the dissolution time of the DFs (via the use of the siphon structure), but still allow the sequence of valve actuation to be determined by the disc architecture. Thus, this platform has the potential to be applied across a wider range of different biomedical diagnostic applications.

The following are available online at https://www.mdpi.com/2079-6374/11/3/73/s1. ESI.pdf contains additional information pertaining to the assay optimization and protocols used. Video S1: Optimized Design.mp4 shows the disc design used in these experiments. In this video, colored water was used for visualization, incubations were shortened, and the video was accelerated 8x to assist with viewing. Video S2: Dual Pneumatic.mp4 shows an earlier design used in preliminary testing. Here the centrifugo-pneumatic valve was split into two chambers to better control sample fluid height in the incubation chamber. Video play at 8x normal speed for ease of viewing.

This publication has emanated from research supported in part by grants from Science Foundation Ireland under Grant numbers10/CE/B1821 and 16/RC/3872. For the purpose of Open Access, the author has applied a CC BY public copyright license to any Author Accepted Manuscript version arising from this submission.

Videos of discs in operation are provided as part of ESI for this manuscript.

The authors would like to acknowledge the kind advice provided by Macdara Glynn regarding design of ELISA assays. The authors thank Linda Hughes for kind access to laboratory facilities and instruments. B.D.H. thanks Philip Early and Daryl Lawlor for sharing expertise in microfabrication. 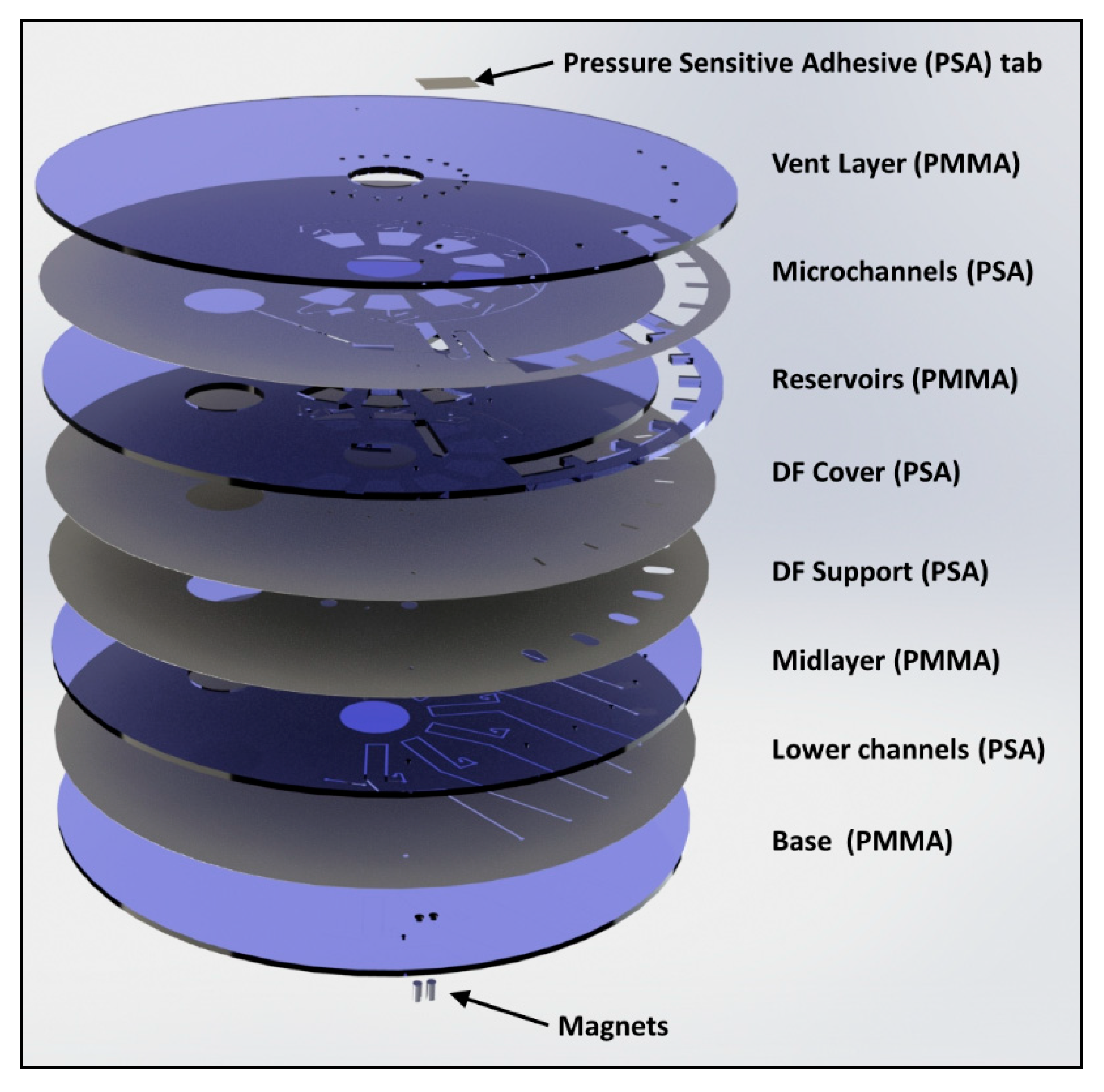 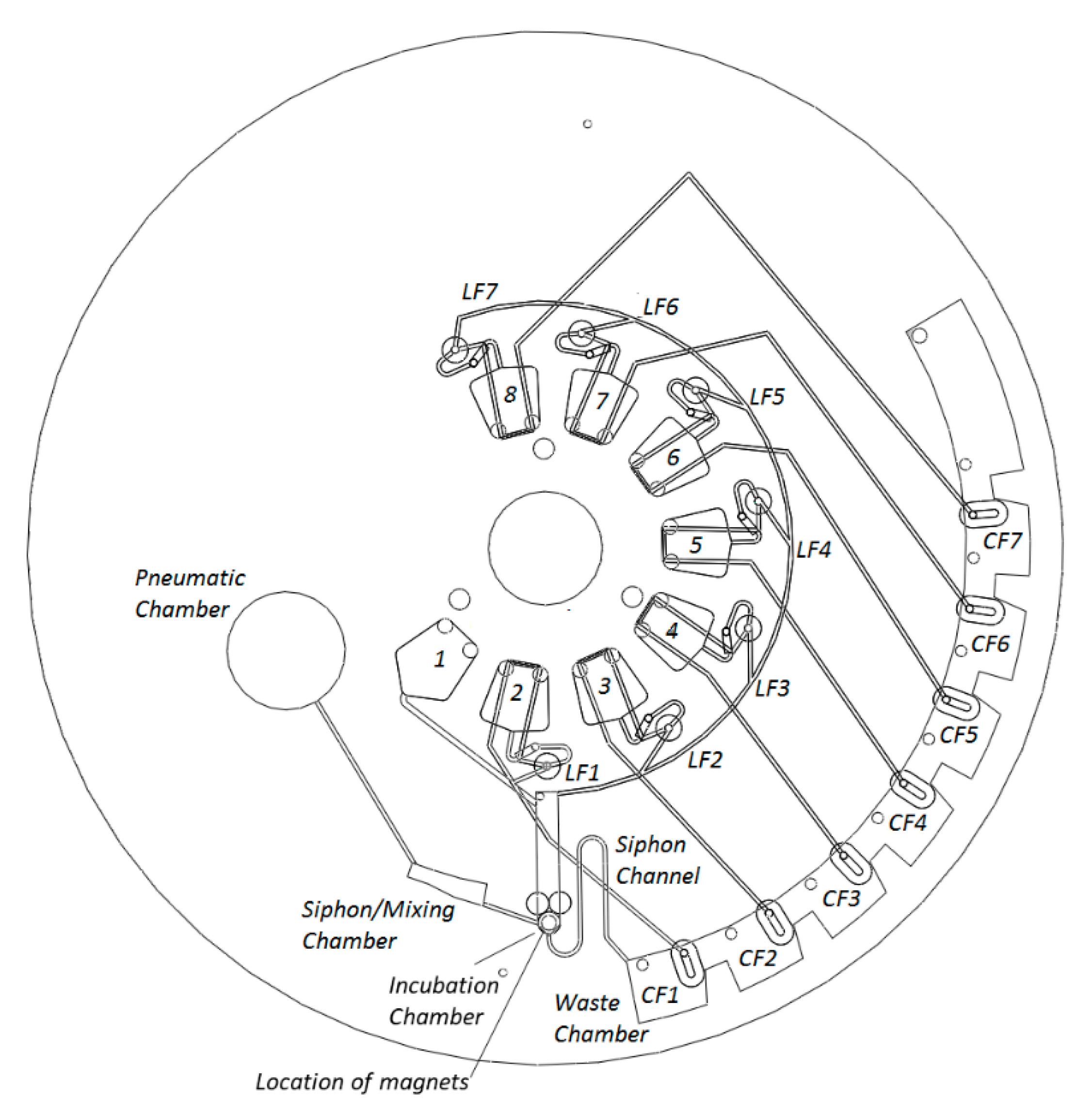