Sensitivity of Flood Hazard and Damage to Modelling Approaches

Gated storm surge barriers are being studied by the United States Army Corps of Engineers (USACE) for coastal storm risk management for the New York City metropolitan area. Surge barrier gates are only closed when storm tides exceeding a specific “trigger” water level might occur in a storm. Gate closure frequency and duration both strongly influence the physical and environmental effects on enclosed estuaries. In this paper, we use historical observations to represent future storm tide hazard, and we superimpose local relative sea-level rise (SLR) to study the potential future changes to closure frequency and duration. We account for the effects of forecast uncertainty on closures, using a relationship between past storm surge and forecast uncertainty from an operational ensemble forecast system. A concern during a storm surge is that closed gates will trap river streamflow and could cause a new problem with trapped river water flooding. Similarly, we evaluate this possibility using historical data to represent river flood hazard, complemented by hydrodynamic model simulations to capture how waters rise when a hypothetical barrier is closed. The results show that SLR causes an exponential increase of the gate closure frequency, a lengthening of the closure duration, and a rising probability of trapped river water flooding. The USACE has proposed to prevent these SLR-driven increases by periodically raising the trigger water level (e.g., to match a prescribed storm return period). However, this alternative management approach for dealing with SLR requires waterfront seawalls to be raised at a high, and ongoing, additional future expense. For seawalls, costs and benefits will likely need to be weighed on a neighborhood-by-neighborhood basis, and in some cases retreat or other non-structural options may be preferable. View Full-Text
Keywords: storm surge barrier; sea level rise; hazard assessment; risk reduction; adaptation; flood duration; hydrodynamic model; New York City storm surge barrier; sea level rise; hazard assessment; risk reduction; adaptation; flood duration; hydrodynamic model; New York City
►▼ Show Figures 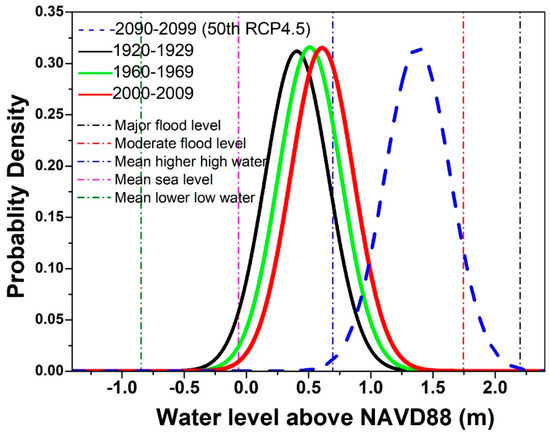