Risk and Predisposing Factors for Suicide Attempts in Patients with Migraine and Status Migrainosus: A Nationwide Population-Based Study
Next Article in Special Issue

The Effect of Gamification through a Virtual Reality on Preoperative Anxiety in Pediatric Patients Undergoing General Anesthesia: A Prospective, Randomized, and Controlled Trial
Previous Article in Journal

We recruited 47 healthy young adults of different ethnic backgrounds and both genders who spoke English from a university in the northeastern region of the United States via web advertisements and flyers. Participants were eligible if they met the following conditions: (1) were between 18 and 25 years old; (2) were free from physical disability (e.g., gait abnormalities); and (3) were not a current or former user of tobacco. Our study was approved by the Institutional Review Board of Northeastern University and all participants signed a written consent form for their participation.

We used a cross-sectional design and collected data from 22 March 2017 to 21 September 2017. Once a participant arrived at the laboratory, we provided the participant with an orientation on study procedures and potential risks. We measured their weight and height and computed their body mass index (BMI; kg/m2). We used ActiGraph tri-axial monitors (ActiGraph LLC, Pensacola, FL, USA) including wGT3X (46 × 33 × 15 mm, mass 19 g) and GT9X (35 × 35 × 10 mm, mass 14 g). We rotated and counterbalanced the placement of the ActiGraph monitors to avoid any potential order or placement effects.
Using the ActiLife software v.6.13.2 (ActiGraph LLC, Pensacola, FL, USA), we initialized four ActiGraph tri-axial monitors at a sampling rate of 30 Hz and set the Bluetooth wireless function for a wrist-worn GT9X to integrate with a Polar H7 Bluetooth heart rate sensor (Polar Electro Inc., Lake Success, NY, USA) for continuous heart rate measurement. We positioned a wGT3X with a belt clip and GT9X with an elastic belt at the anterior axillary line of the nondominant hip and another wGT3X with a nylon band and GT9X with a silicone band on the nondominant wrist [14]. We also placed a Polar H7 Bluetooth heart rate sensor on the chest with a soft textile strap.
After we confirmed that all devices worked properly, participants played for three 10-min segments for a total of 30 min. Each segment comprised 2 min of passive rest (standing) followed by 8 min of playing Kung-Fu for Kinect (http://www.kungfuforkinect.com), which involves upper and lower movements via a Kinect sensor on an Xbox One console (Microsoft Inc., Redmond, WA, USA). While playing the exergame, a participant could see his/her own body on the screen and fought enemies using his/her own moves in a 2D fighting adventure environment. When different enemies appeared on the screen, a participant engaged them with a variety of intermittent and spontaneous movement patterns and skills (e.g., jumping, punching, kicking). The intensity level of the exergaming was determined by continuous HR measurement as described above and self-assessment using the Borg rating of perceived exertion (RPE) [32] before and immediately after the 30-min exergaming play. We monitored the play time and recorded the start and end time of each interval on a study checklist.

The ActiGraph tri-axial monitors measure accelerations from the subject’s amplitude (g) and frequency (Hz) of movement in three individual axes (X axis: anterior-posterior, Y axis: vertical, Z axis: medial-lateral). Using the ActiLife software v.6.13.2, we transferred the collected data from the monitors and downloaded the activity counts from the three axes and vector magnitude (VM) obtained from all three axes (x2 + y2 + z2)1/2 with six epoch lengths (1, 5, 10, 15, 30, and 60 s). We used the two popular and validated Sasaki and Troiano’s activity cut-point sets [3,4] as appropriate for adults to estimate the amount of time spent in sedentary behavior (SB) and light (LPA), moderate (MPA), vigorous (VPA), and very vigorous physical activity (VVPA): (1) Sasaki’s cut-points [4] (e.g., a 60 s epoch (counts per minute, CPM): ≤150, 151–2690, 2691–6166, 6167–9642, and >9642) for the categories of SB, LPA, MPA, VPA, and VVPA, respectively, and (2) Troiano’s cut-points [3] (e.g., a 60 s epoch (CPM): ≤100, 101–2019, 2020–5998, and ≥5998) for SB, LPA, MPA, and VPA. We combined Sasaki’s VVPA with VPA for subsequent data analysis. Sasaki did not report classifications of either SB or LPA; thus, we used ≤150 and 151–2690 to define these categories, respectively, as 150 CPM may be the most appropriate cut-point to use to define SB for ActiGraph monitors [2,33]. We then converted the dataset into another of five shorter epoch lengths (1, 5, 10, 15, and 30 s) and recalculated the sedentary and physical activity intensity levels for subsequent data analysis. We also summed the step counts calculated from the built-in algorithm of the ActiLife software using a zero-crossing method based on raw accelerations from the vertical axis [1].
We downloaded HR data recorded at every second as a 10-s interval dataset. To compare intensity assessed indirectly via HR with the categories from activity counts in six epoch lengths, we calculated the amount of time spent in SB (<57), LPA (57–63), MPA (64–76), and VPA (>77) based on the categories of relative exercise intensity (%HRmax) [30] after adjusting for age-predicted maximal HR [208 − (0.7 × age)] [34].

We ran statistical data analysis separately for the hip and the wrist. Of the 47 subjects, we analyzed 47 datasets from the wrist but only 45 datasets from the hip for activity counts due to a technical problem with two of the monitors. Additionally, of the 47 subjects, 41 datasets for heart rate were analyzed; five were excluded due to inappropriate data for analysis (namely, logging more than 25 of 30 min at the sedentary level) and a technical problem for one additional monitor.
We used intraclass correlation coefficients (ICC) to examine intermonitor agreement in steps and activity counts using the following categories [35]: poor (<0.5); moderate (0.5–0.75); good (0.75–0.9); and excellent (>0.9). We confirmed this using a Bland-Altman analysis to assess the mean bias and limits of agreement and calculated mean bias % as (GT9X − wGT3X)/mean% [36]. For the Bland-Altman plots and ICC analyses, we used Sasaki’s activity cut-points to compare steps, each axis count (CPM), and VM (CPM) between wGT3X and GT9X placed on the hip or the wrist. Additionally, due to the orientation difference of the wGT3X and GT9X monitors when worn on the wrist, we compared data from the Y and X axes in the GT9X to the data from the X and Y axes in the wGT3X, respectively, according to the manufacturer’s suggestion (J. MacDonald, written communication, May 2018) (see Supplemental Figure S1). We also performed a repeated measures ANOVA: (1) to assess the mean differences of steps, the three axes’ activity counts, and the VM between the monitors; (2) to test for an interaction for time spent in SB and the different levels of physical activity intensity in six epoch lengths with two monitors and two activity cut-point sets; and (3) to compare the mean amount of time spent in SB and different levels of physical activity intensity assessed via HR and activity counts (categorized separately using the two activity cut-point sets) in six epoch lengths averaged from two monitors. When a significant interaction was observed, we performed a Tukey’s post hoc test to identify pairwise differences. All statistical data analyses were conducted with IBM SPSS 24.0 (IBM Corp., Armonk, NY, USA). The criterion for significance was p < 0.05. Data are presented as mean ± standard deviation.

3.2. Agreement between GT9X and wGT3X Placed on Hip and Wrist

3.4. Sedentary and Physical Activity Levels Between Heart Rate and Activity Counts in Epochs

We demonstrated that the activity monitors we used are valid and reliable devices for step-counting accuracy when placed on the hip, and that the hip compared to the wrist is also a more appropriate placement site for accurately measuring levels of physical activity intensity. We suggest that a 1-s epoch is the best choice for data processing and analysis of activity counts for the activity monitors we used in the present study for physical activity assessment. We further recommend that heart rate can be used as a comparator for the validation of cut-points from activity counts. Our findings are applicable in other clinical, research, or school settings focusing on intermittent physical activities similar to exergaming.

This work was supported in part by funding from the National Institute of Diabetes and Digestive and Kidney Diseases (1R01DK109316), The narrative effect of active video games on long-term moderate-to-vigorous physical activity, PI: Amy Shirong Lu. 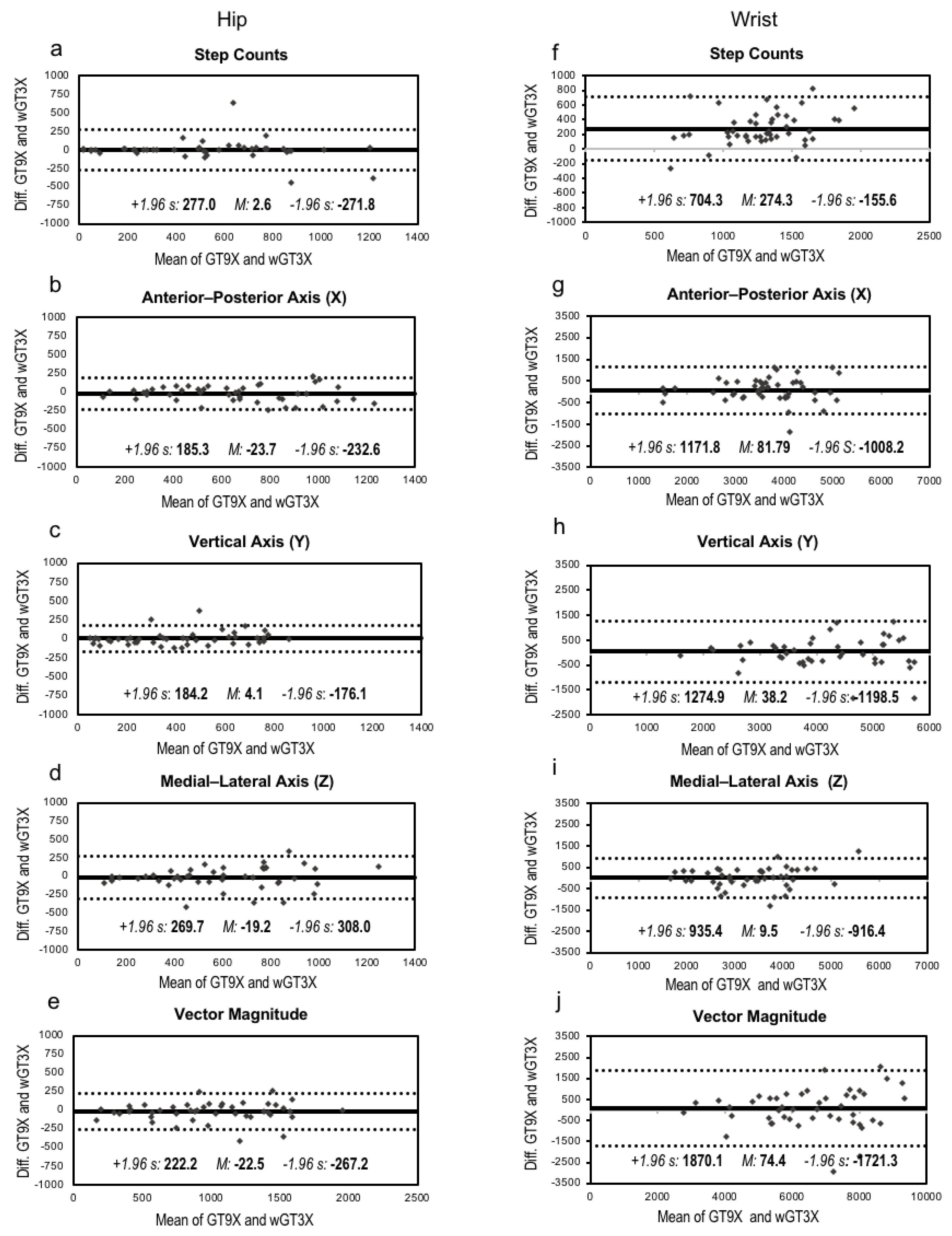