Avian Stress-Related Transcriptome and Selenotranscriptome: Role during Exposure to Heavy Metals and Heat Stress
Next Article in Special Issue

Tea is among the most consumed drink worldwide, and its strong antioxidant activity is considered as the main contributor to several health benefits, such as cardiovascular protection and anticancer effect. In this study, the antioxidant activities of 30 tea infusions, which were obtained by the mimic of drinking tea of the public, from green, black, oolong, white, yellow and dark teas, were evaluated using ferric-reducing antioxidant power (FRAP) and Trolox equivalent antioxidant capacity (TEAC) assays, ranging from 504.80 ± 17.44 to 4647.47 ± 57.87 µmol Fe2+/g dry weight (DW) and 166.29 ± 24.48 to 2532.41 ± 50.18 µmol Trolox/g DW, respectively. Moreover, their total phenolic contents (TPC) were detected by Folin-Ciocalteu assay and were in the range of 24.77 ± 2.02 to 252.65 ± 4.74 mg gallic acid equivalent (GAE)/g DW. Generally, Dianqing Tea, Lushan Yunwu Tea, and Xihu Longjing Tea showed the strongest antioxidant activities among 30 teas. Furthermore, the phenolic compounds in tea infusions were identified and quantified, with catechins most commonly detected, especially in green tea infusions, which were main contributors to their antioxidant activities. Besides tea polyphenols, considerable content of caffeine also presented in 30 tea infusions. View Full-Text
Keywords: tea; Camellia sinensis; antioxidant activity; polyphenol; catechin; caffeine tea; Camellia sinensis; antioxidant activity; polyphenol; catechin; caffeine
►▼ Show Figures 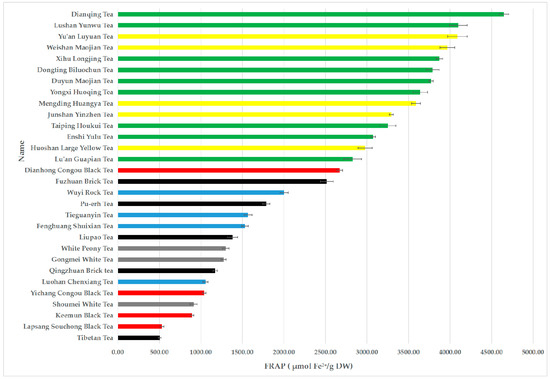