Quantification of Polyphenols in Seaweeds: A Case Study of Ulva intestinalis
Next Article in Special Issue

Potential of Smoke-Water and One of Its Active Compounds (karrikinolide, KAR1) on the Phytochemical and Antioxidant Activity of Eucomis autumnalis

Eucomis autumnalis (Mill.) Chitt. subspecies autumnalis is a popular African plant that is susceptible to population decline because the bulbs are widely utilized for diverse medicinal purposes. As a result, approaches to ensure the sustainability of the plants are essential. In the current study, the influence of smoke-water (SW) and karrikinolide (KAR1 isolated from SW extract) on the phytochemicals and antioxidant activity of in vitro and greenhouse-acclimatized Eucomis autumnalis subspecies autumnalis were evaluated. Leaf explants were cultured on Murashige and Skoog (MS) media supplemented with SW (1:500, 1:1000 and 1:1500 v/v dilutions) or KAR1 (10−7, 10−8 and 10−9 M) and grown for ten weeks. In vitro regenerants were subsequently acclimatized in the greenhouse for four months. Bioactive phytochemicals in different treatments were analyzed using ultra-high performance liquid chromatography (UHPLC-MS/MS), while antioxidant potential was evaluated using two chemical tests namely: DPPH and the β-carotene model. Smoke-water and KAR1 generally influenced the quantity and types of phytochemicals in in vitro regenerants and acclimatized plants. In addition to eucomic acid, 15 phenolic acids and flavonoids were quantified; however, some were specific to either the in vitro regenerants or greenhouse-acclimatized plants. The majority of the phenolic acids and flavonoids were generally higher in in vitro regenerants than in acclimatized plants. Evidence from the chemical tests indicated an increase in antioxidant activity of SW and KAR1-treated regenerants and acclimatized plants. Overall, these findings unravel the value of SW and KAR1 as potential elicitors for bioactive phytochemicals with therapeutic activity in plants facilitated via in vitro culture systems. In addition, it affords an efficient means to ensure the sustainability of the investigated plant. Nevertheless, further studies focusing on the use of other types of antioxidant test systems (including in vivo model) and the carry-over effect of the application of SW and KAR1 for a longer duration will be pertinent. In addition, the safety of the resultant plant extracts and their pharmacological efficacy in clinical relevance systems is required. View Full-Text
Keywords: asparagaceae; conservation; eucomic acid; flavonoids; hydroxybenzoic acids; hydroxycinnamic acids; phenolic acids; micropropagation asparagaceae; conservation; eucomic acid; flavonoids; hydroxybenzoic acids; hydroxycinnamic acids; phenolic acids; micropropagation
►▼ Show Figures 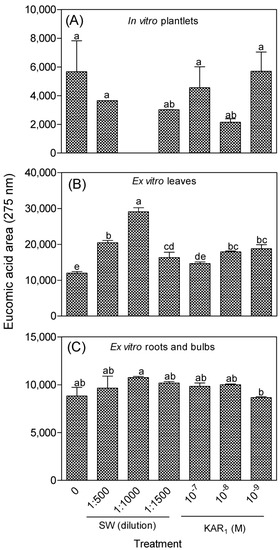 
Aremu, Adeyemi O.; Masondo, Nqobile A.; Gruz, Jiri; Doležal, Karel; Van Staden, Johannes. 2019. "Potential of Smoke-Water and One of Its Active Compounds (karrikinolide, KAR1) on the Phytochemical and Antioxidant Activity of Eucomis autumnalis." Antioxidants 8, no. 12: 611.