A Pathway-Based Genomic Approach to Identify Medications: Application to Alcohol Use Disorder

The centrally-projecting Edinger–Westphal nucleus (EWcp) is a brain region distinct from the preganglionic Edinger–Westphal nucleus (EWpg). In contrast to the EWpg, the EWcp does not send projections to the ciliary ganglion and appears not to regulate oculomotor function. Instead, evidence is accumulating that the EWcp is extremely sensitive to alcohol and several other drugs of abuse. Studies using surgical, genetic knockout, and shRNA approaches further implicate the EWcp in the regulation of alcohol sensitivity and self-administration. The EWcp is also known as the site of preferential expression of urocortin 1, a peptide of the corticotropin-releasing factor family. However, neuroanatomical data indicate that the EWcp is not a monotypic brain region and consists of several distinct subpopulations of neurons. It is most likely that these subpopulations of the EWcp are differentially involved in the regulation of actions of addictive drugs. This review summarizes and analyzes the current literature of the EWcp’s involvement in actions of drugs of abuse in male and female subjects in light of the accumulating evidence of complexities of this brain region. View Full-Text
Keywords: Edinger–Westphal nucleus; ethanol; addiction; neurocircuitry Edinger–Westphal nucleus; ethanol; addiction; neurocircuitry
►▼ Show Figures 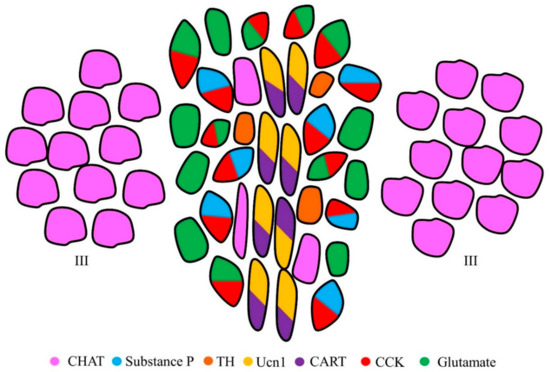