Language impairment is a core difficulty in fragile X syndrome (FXS), and yet standardized measures lack the sensitivity to assess developmental changes in the nature of these impairments. Expressive Language Sampling Narrative (ELS-N) has emerged as a promising new measure with research demonstrating its usefulness in a wide range of ages in developmental disabilities and typical development. We examined ELS-N results in FXS and age-matched typically developing (TD) controls along with cognitive, adaptive, and clinical measures. We found the groups differed significantly on all ELS-N variables. Cognitive abilities were related to lexical diversity, syntactic complexity, and unintelligibility for the FXS group, but only verbal abilities were related to syntactic complexity in TD. Autism spectrum disorder (ASD) symptomatology was related to less intelligibility in speech. Measures of hyperactivity were related to increased talkativeness and unintelligibility. In addition, FXS males in comparison to FXS females were more impaired in cognitive ability, ASD symptoms, hyperactivity, and anxiety. This study extends the previous ELS research, supporting its use in FXS research as a measure to characterize language abilities. It also demonstrates the relationships between ELS-N variables and measures of cognitive, adaptive, ASD symptoms, and clinical symptoms. View Full-Text
Keywords: Fragile X Syndrome; expressive language sampling; language impairments; ASD; hyperactivity; talkativeness; intelligibility Fragile X Syndrome; expressive language sampling; language impairments; ASD; hyperactivity; talkativeness; intelligibility
►▼ Show Figures 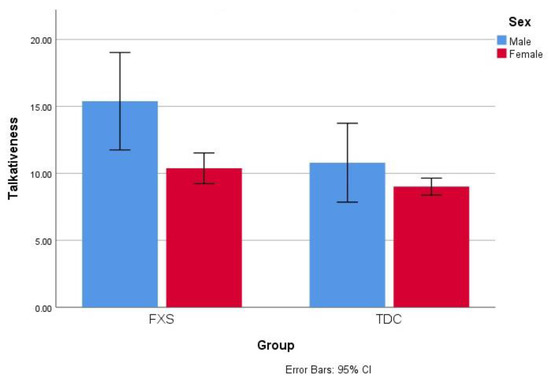