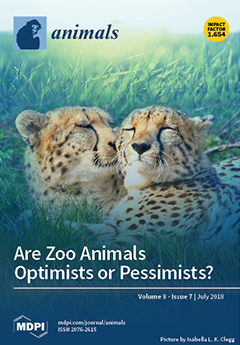 Cover Story (view full-size image): Cognitive bias testing can reveal the level of optimism and pessimism in animals' judgements, and has emerged as a valuable welfare tool, since optimistic decisions have been found to correlate to better welfare, and vice versa. While cognitive bias tests have been extensively applied in farm and laboratory settings, only a few studies have taken place in zoos. This review evaluates past cognitive bias studies on non-domesticated, ‘exotic’ species kept in zoos or other settings and collates the many "Zoo Environment Variables" inherent to functioning zoos and aquaria that will influence the design and execution of such studies in this setting. Dr Isabella Clegg, of Animal Welfare Expertise, says, "Conducting cognitive bias studies in zoos could significantly benefit animals, managers, and scientists alike through increasing our knowledge of what drives their emotions and welfare states." View this paper
Previous Issue
Volume 8, June
Next Issue
Volume 8, August
We use cookies on our website to ensure you get the best experience. Read more about our cookies here.
Accept
We have just recently launched a new version of our website. Help us to further improve by taking part in this short 5 minute survey here. here.
Never show this again