Effects of 5-Aminolevulinic Acid as a Supplement on Animal Performance, Iron Status, and Immune Response in Farm Animals: A Review

A lactation curve (LC) provides valuable insights in planning appropriate management strategies related to health, nutrition, and breeding in dairy cows. A clustering based approach on LC patterns analysis is presented. The k-medoids algorithm is adopted for the clustering. This approach generates several clusters which have similar milking characteristics of total milk yield, peak milk yield, and days in milk at peak yield. The LCs of some groups represent characteristics of atypical milking patterns which are not considered much in previous approaches, whereas LCs of the other groups show the typical LC patterns similar to the results of previous methods. This approach could be used as a tool to manage an abnormal herd of cows.

The aim of the study was to group the lactation curve (LC) of Holstein cows in several clusters based on their milking characteristics and to investigate physiological differences among the clusters. Milking data of 330 lactations which have a milk yield per day during entire lactation period were used. The data were obtained by refinement from 1332 lactations from 724 cows collected from commercial farms. Based on the similarity measures, clustering was performed using the k-medoids algorithm; the number of clusters was determined to be six, following the elbow method. Significant differences on parity, peak milk yield, DIM at peak milk yield, and average and total milk yield (p < 0.01) were observed among the clusters. Four clusters, which include 82% of data, show typical LC patterns. The other two clusters represent atypical patterns. Comparing to the LCs generated from the previous models, Wood, Wilmink and Dijsktra, it is observed that the prediction errors in the atypical patterns of the two clusters are much larger than those of the other four cases of typical patterns. The presented model can be used as a tool to refine characterization on the typical LC patterns, excluding atypical patterns as exceptional cases. View Full-Text
Keywords: dairy cow; lactation curve; k-medoids clustering; milking characteristics; model fitting dairy cow; lactation curve; k-medoids clustering; milking characteristics; model fitting
►▼ Show Figures 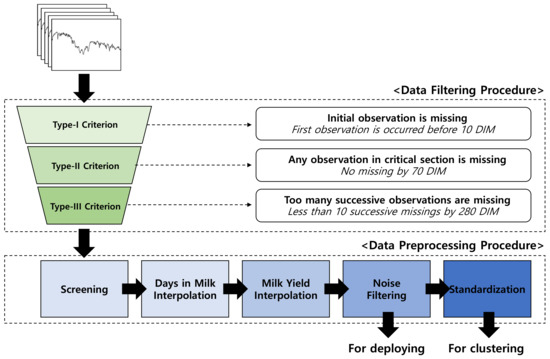