Monitoring of Pseudorabies in Wild Boar of Germany—A Spatiotemporal Analysis

To evaluate recent developments regarding the epidemiological situation of pseudorabies virus (PRV) infections in wild boar populations in Germany, nationwide serological monitoring was conducted between 2010 and 2015. During this period, a total of 108,748 sera from wild boars were tested for the presence of PRV-specific antibodies using commercial enzyme-linked immunosorbent assays. The overall PRV seroprevalence was estimated at 12.09% for Germany. A significant increase in seroprevalence was observed in recent years indicating both a further spatial spread and strong disease dynamics. For spatiotemporal analysis, data from 1985 to 2009 from previous studies were incorporated. The analysis revealed that PRV infections in wild boar were endemic in all German federal states; the affected area covers at least 48.5% of the German territory. There were marked differences in seroprevalence at district levels as well as in the relative risk (RR) of infection of wild boar throughout Germany. We identified several smaller clusters and one large region, where the RR was two to four times higher as compared to the remaining areas under investigation. Based on the present monitoring intensity and outcome, we provide recommendations with respect to future monitoring efforts concerning PRV infections in wild boar in Germany. View Full-Text
Keywords: Germany; monitoring; pseudorabies; Aujeszky’s disease; spatiotemporal analysis; relative risk; wild boar Germany; monitoring; pseudorabies; Aujeszky’s disease; spatiotemporal analysis; relative risk; wild boar
►▼ Show Figures 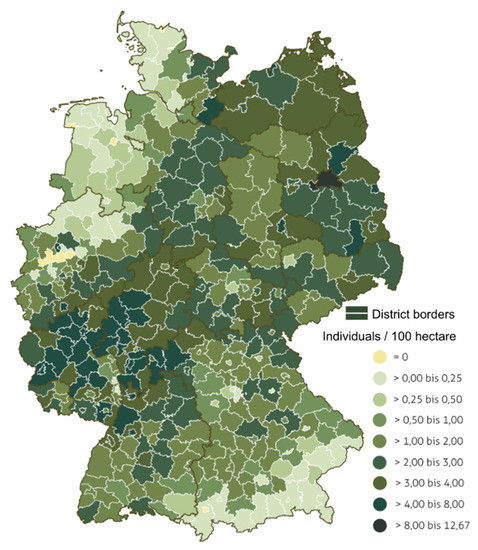