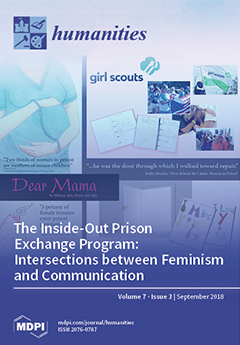 Cover Story (view full-size image): This paper explores the intersections between feminism and communication in an Inside-Out Prison Exchange Program course that is cross-listed with Social Justice and Women’s and Gender Studies. The paper focuses on the alignment of the Inside-Out curriculum with feminist pedagogical principles and explores, through the structure and content of the course, the ways in which these feminist principles interconnect with communication concepts. View this paper
Previous Issue
Volume 7, June
Next Issue
Volume 7, December
We use cookies on our website to ensure you get the best experience. Read more about our cookies here.
Accept
We have just recently launched a new version of our website. Help us to further improve by taking part in this short 5 minute survey here. here.
Never show this again