Positioning Ethos in/for the Twenty-First Century: An Introduction to Histories of Ethos

Dehumanized Victims: Analogies and Animal Avatars for Palestinian Suffering in Waltz with Bashir and “War Rabbit”

A common convention in comics and animation is the use of animal stand-ins to provide an access point for human experiences. Whether representing anthropomorphized characters navigating very human experiences or depicting four-legged creatures impacted by human action, this strategy has the manifest intent of fostering viewer identification and empathy. In particular, artists sometimes deploy animal avatars in representations of persecution and historical trauma to avoid depicting identity categories such as race, nationality and sexuality, which constitute the ostensible basis for persecution. In this way, the use of animals to represent human suffering universalizes experiences for which difference matters. In this essay, I explore how these animal stand-ins enable or foreclose empathy with Palestinian victims in the close reading of two primary texts, “War Rabbit” and Waltz with Bashir, which employ animal avatars in place of a direct depiction of Palestinian suffering. These illustrated narratives, one a comic and one an animated film, visually rhyme animal and human suffering and verbally lament the deaths of animals. I argue that both texts fail to unpack the analogies they construct, such that these constructions ultimately represent the actual Palestinians victims as being mute and irrational. Thus this use of animal avatars, which is meant to be foster empathy, is instead oblique, and risks further dehumanizing victims and negating their experiences. View Full-Text
Keywords: animal; victims; comics; animation; trauma animal; victims; comics; animation; trauma
►▼ Show Figures 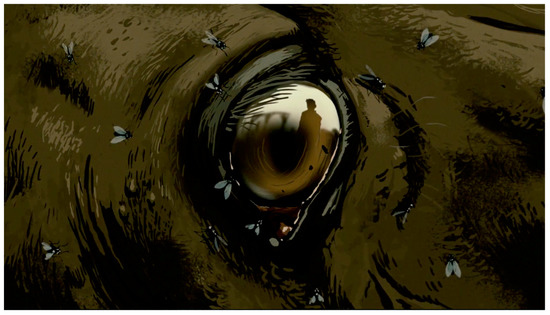