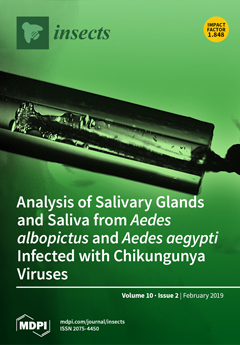 Cover Story (view full-size image): Analysis of salivary glands and saliva from Aedes albopictus and Aedes aegypti infected with chikungunya viruses. Saliva collection (cover) from an Aedes al. infected with Chikungunya virus (CHIKV). The proboscis of the mosquito is inserted into a micropipette containing oil to collect saliva. This study shows that if introduced in the western hemisphere, some CHIKV genotypes may pose even a greater risk of transmission by both Aedes species. View this paper
Previous Issue
Volume 10, January
Next Issue
Volume 10, March
We use cookies on our website to ensure you get the best experience. Read more about our cookies here.
Accept
We have just recently launched a new version of our website. Help us to further improve by taking part in this short 5 minute survey here. here.
Never show this again