Termite Ecology in the First Two Decades of the 21st Century: A Review of Reviews
Next Article in Special Issue

Invasion Dynamics of A Termite, Reticulitermes flavipes, at Different Spatial Scales in France

As a signature of reproductive interference (RI), we reviewed hybrid production in eusocial bumblebees in Japan, by comparing introduced Bombus terrestris with native B. ignitus in Honshu (main island of Japan) and with native B. hypocrita sapporoensis in Hokkaido (northern island of Japan). In this review, we present additional new data showing hybrid production between introduced B. terrestris and native B. ignitus in Honshu. Interspecific mating with introduced B. terrestris disrupts the reproduction of native B. h. sapporoensis and B. ignitus, which belong to the same subgenus of Bombus, through inviable egg production. This interference appears to facilitate species replacement on Hokkaido. Simultaneously, the mating frequencies for queens of B. terrestris have increased, suggesting that polyandry might evolve in response to the extent of RI between B. terrestris and B. h. sapporoensis. To suppress the population size of B. terrestris in Hokkaido, two methods have been proposed: the mass release of B. h. sapporoensis males to induce RI between the two species and the spraying of insecticides against foraging workers so that the workers will carry the insecticides back to their colonies, killing the immature bees within the colonies. A candidate insecticide type is insect growth regulator, which may disrupt larval development without any apparent effect on foraging workers. View Full-Text
Keywords: reproductive interference; bumblebees; hybrid production; hybrid inviability reproductive interference; bumblebees; hybrid production; hybrid inviability
►▼ Show Figures 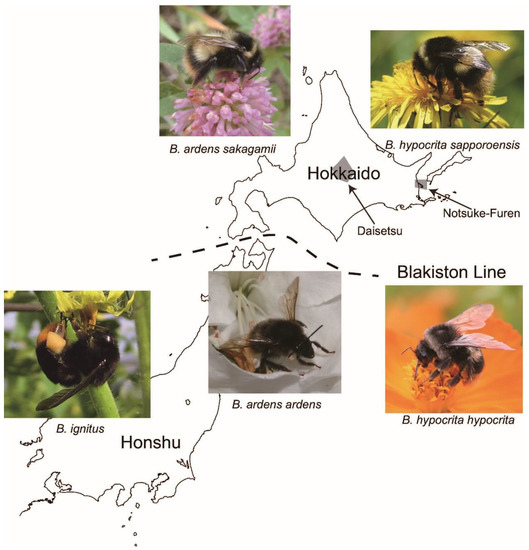