Estuarine tidal creeks are an important conduit for freshwater run-off into the coastal ocean. In Long Bay, South Carolina, tidal creeks terminate in swashes—broad sandy fields constantly reworked by discharged creek water. We examined the role of a highly permeable sandy column in altering the nutrient loading of the passing water at Singleton Swash, Myrtle Beach, South Carolina. Seasonal transects along the swash’s primary channel documented gradients in physical and biogeochemical parameters. The nutrient and chlorophyll a concentrations were higher in the sediment than in the overlying water, consistent with coastal sediments as a major site of organic matter degradation, nutrient regeneration, and benthic primary productivity. Oxygen, nutrient, and chlorophyll concentrations exhibited a strong seasonal component, explained by a photosynthesis–respiration balance shift between summer and winter. The conservative mixing model approach to elucidate the sink–source patterns was moderately informative due to the lack of a gradual salinity gradient from land to ocean, due to substantial tidal flushing and observable nutrient-rich surface freshwater discharges along the channel that fueled substantial submerged aquatic macroalgal growth. Future studies should focus on the role of benthic photosynthesizers, both microbial and macroalgal, in retaining land-derived nutrients in irrigation freshwater inputs prior to them reaching the coastal ocean. View Full-Text
Keywords: permeable sediments; swashes; tidal creeks; nutrients; chlorophyll; benthic primary productivity; conservative mixing permeable sediments; swashes; tidal creeks; nutrients; chlorophyll; benthic primary productivity; conservative mixing
►▼ Show Figures 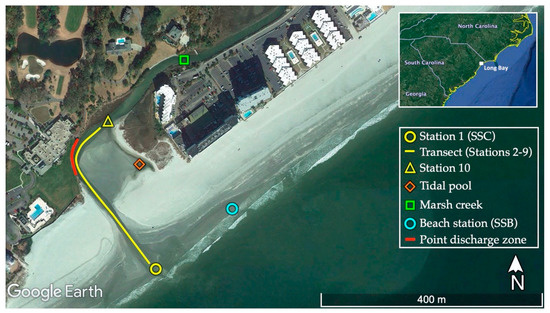