A Revised Method of Surface Water Quality Evaluation Based on Background Values and Its Application to Samples Collected in Heilongjiang Province, China
Previous Article in Journal

The lack of rainfall in the Canary Islands′ Archipelago is leading to the depletion of the existing aquifers throughout the islands, above all in the easternmost isles (Gran Canaria, Lanzarote and Fuerteventura). Due to the increasing water demand in the southern area of the Island of Gran Canaria, appropriate planning has become necessary in order to avoid the depletion of the phreatic water resources that can be found there. One of the most affected areas is the Amurga Mountain Range, where the existing aquifers are depleted, as shown in the Hydrological Plan of Gran Canaria. The aim of this study was to characterize the hydrochemistry of the above-mentioned groundwater bodies. Water quality monitoring was carried out over a period of five years, involving the survey of a total of 288 samples (over 4300 tests). The water from those aquifers has the characteristic of being fairly mineralized, with a prevalence of Cl−, Ca2+ and Na+ ions, salinity levels reaching 8646 mg/L, and chloride levels up to 4200 mg/L. The waters of these aquifers can be divided into two basic types, i.e., those containing high levels of sodium chloride, which can be found around the Tirajana Gorge; and the waters rich in magnesium chloride and sodium sulfate in the Arguineguín Gorge, as well as in the Amurga Massif itself. View Full-Text
Keywords: hydrochemistry; volcanic aquifer; aquifer overexploitation; Amurga Massif; Canary Islands hydrochemistry; volcanic aquifer; aquifer overexploitation; Amurga Massif; Canary Islands
►▼ Show Figures 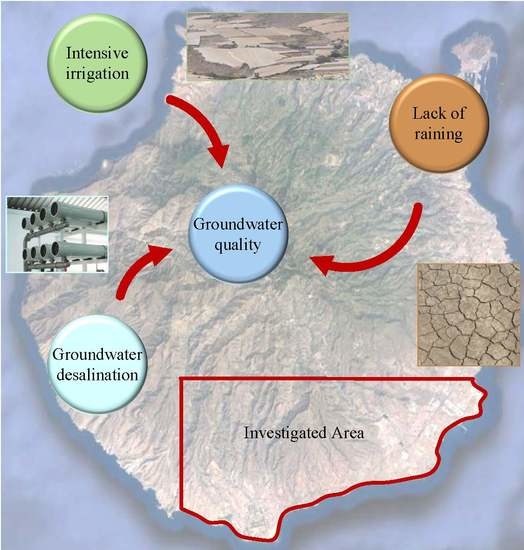