Flooding has been reported more often than in the past in most cities of China in recent years. In response, China’s State Council has urged the 36 largest cities to update the preparedness to handle the 50-year rainfall, which would be a massive project with large investments. We propose a staged optimization design for updating urban drainage that is not only a flexible option against environmental changes, but also an effective way to reduce the cost of the project. The staged cost optimization model involving the hydraulic model was developed in Fuzhou City, China. This model was established to minimize the total present costs, including intervention costs and flooding costs, with full consideration of the constraints of specific local conditions. The results show that considerable financial savings could be achieved by a staged design rather than the implement-once scheme. The model’s sensitivities to four data parameters were analyzed, including rainfall increase rate, flood unit cost, storage unit cost, and discount rate. The results confirm the applicability and robustness of the model for updating drainage systems to meet the requirements. The findings of this study may have important implications on urban flood management in the cities of developing countries with limited construction investments. View Full-Text
Keywords: urban flood management; urban drainage systems; staged optimization model; optimization design; sensitivity analysis; China urban flood management; urban drainage systems; staged optimization model; optimization design; sensitivity analysis; China
►▼ Show Figures 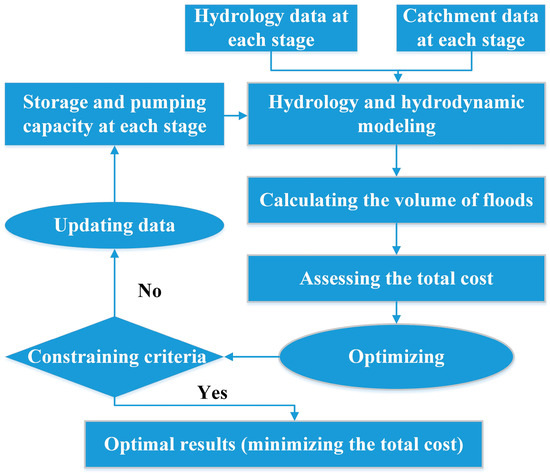