Tornadoes in Portugal: An Overview

From 2000 onwards, a systematic documentation of tornado reports was maintained at the Portuguese Meteorological Service (IPMA). The characteristics of 195 tornado events over land and at sea off the coast of mainland Portugal, Azores, and Madeira Islands, reported until 2020, were compiled into a new tornado database for Portugal. Each event was identified through the direct observation of the vortex, photography or video footage, or eyewitness descriptions, as well as by site surveys, including the interpretation of traces of the tornado found on the ground. For events after 2006, each data record was complemented with Doppler radar observations and derived products, which allowed a tornado type (TT) classification. The synoptic regimes and atmospheric environments favoring each type were identified using observations and numerical weather prediction model data. Results showed that tornadoes over Portugal were more frequent during autumn, winter, and spring. It was found that the occurrence of more than one tornado on the same day was frequent. The most intense tornadoes, classified as F3 intensity, were spawned by supercells, but a large proportion of weaker, shorter-lived, but still damaging tornadoes were found to be spawned in association with quasi linear convective systems (QLCS). View Full-Text
Keywords: tornado; report; atmospheric environment; supercell; mesovortices; radar; Portugal tornado; report; atmospheric environment; supercell; mesovortices; radar; Portugal
►▼ Show Figures 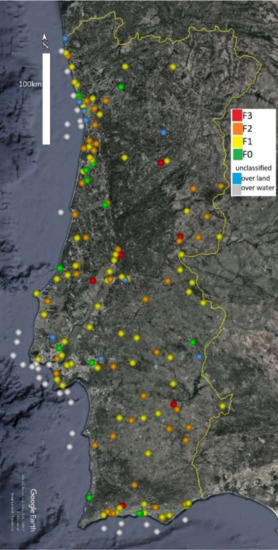