Myosin protein as a molecular motor, binding with Actin, plays a significant role in various physiological activities such as cell division, movement, migration, and morphology; however, there are only a few studies on plant Myosin gene family, particularly in cotton. A total of 114 Myosin genes were found in Gossypium hirsutum, Gossypium barbadense, Gossypium raimondii, and Gossypium arboreum. All Myosins could be grouped into six groups, and for each group of these genes, similar gene structures are found. Study of evolution suggested that the whole genome duplications event occurring about 13–20 MYA (millions of years ago) is the key explanation for Myosins expanse in cotton. Cis-element and qPCR analysis revealed that plant hormones such as abscisic acid, methyl jasmonate, and salicylic acid can control the expression of Myosins. This research provides useful information on the function of Myosin genes in regulating plant growth, production, and fiber elongation for further studies. View Full-Text
Keywords: cotton; Myosin gene family; evolution; expression pattern cotton; Myosin gene family; evolution; expression pattern
►▼ Show Figures 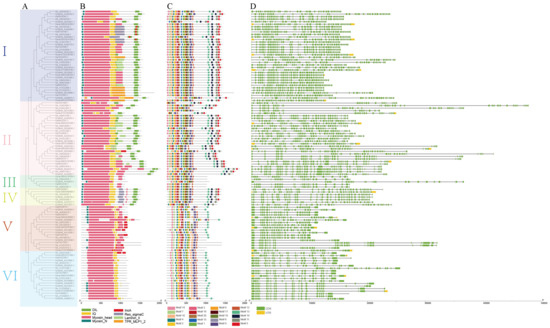