Curcumin, a major active component of turmeric (Curcuma longa, L.), is known to have various effects on both healthy and cancerous tissues. In vitro studies suggest that curcumin inhibits cancer cell growth by activating apoptosis, but the mechanism underlying the anticancer effect of curcumin is still unclear. Since there is a recent consensus about endoplasmic reticulum (ER) stress being involved in the cytotoxicity of natural compounds, we have investigated using Image flow cytometry the mechanistic aspects of curcumin’s destabilization of the ER, but also the status of the lysosomal compartment. Curcumin induces ER stress, thereby causing an unfolded protein response and calcium release, which destabilizes the mitochondrial compartment and induce apoptosis. These events are also associated with secondary lysosomal membrane permeabilization that occurs later together with an activation of caspase-8, mediated by cathepsins and calpains that ended in the disruption of mitochondrial homeostasis. These two pathways of different intensities and momentum converge towards an amplification of cell death. In the present study, curcumin-induced autophagy failed to rescue all cells that underwent type II cell death following initial autophagic processes. However, a small number of cells were rescued (successful autophagy) to give rise to a novel proliferation phase. View Full-Text
Keywords: apoptosis; autophagy; calcium; cancer; cell death; endoplasmic reticulum; lysosome; real-time cellular impedance; ROS; xCELLigence apoptosis; autophagy; calcium; cancer; cell death; endoplasmic reticulum; lysosome; real-time cellular impedance; ROS; xCELLigence
►▼ Show Figures 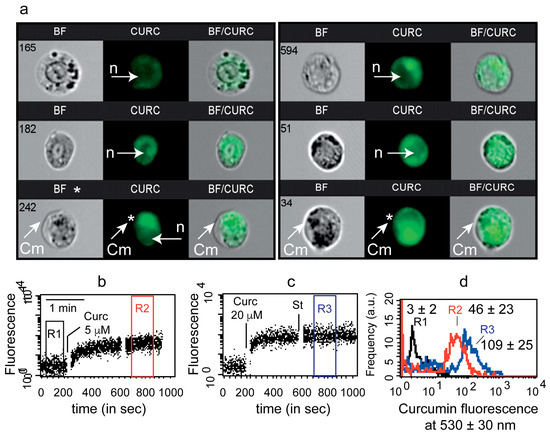