The Dicer protein is one of the most important components of RNAi machinery because it regulates the production of small RNAs (sRNAs) in eukaryotes. Here, Dicer1-like gene (Pit-DCL1) and Dicer2-like gene (Pit-DCL2) RNAi transformants were generated via pSilent-1 in Penicillium italicum (Pit), which is the causal agent of citrus blue mold. Neither transformant showed a change in mycelial growth or sporulation ability, but the pathogenicity of the Pit-DCL2 RNAi transformant to citrus fruits was severely impaired, compared to that of the Pit-DCL1 RNAi transformant and the wild type. We further developed a citrus wound-mediated RNAi approach with a double-stranded fragment of Pit-DCL2 generated in vitro, which achieved an efficiency in reducing Pi-Dcl2 expression and virulence that was similar to that of protoplast-mediated RNAi in P. italicum, suggesting that this approach is promising in the exogenous application of dsRNA to control pathogens on the surface of citrus fruits. In addition, sRNA sequencing revealed a total of 69.88 million potential sRNAs and 12 novel microRNA-like small RNAs (milRNAs), four of which have been predicated on target innate immunity or biotic stress-related genes in Valencia orange. These data suggest that both the Pit-DCL1 and Pit-DCL2 RNAi transformants severely disrupted the biogenesis of the potential milRNAs, which was further confirmed for some milRNAs by qRT-PCR or Northern blot analysis. These data suggest the sRNAs in P. italicum that may be involved in a molecular virulence mechanism termed cross-kingdom RNAi (ck-RNAi) by trafficking sRNA from P. italicum to citrus fruits. View Full-Text
Keywords: citrus; Penicillium italicum; pathogenicity; RNA interference; cross-kingdom RNAi; Dicer; small RNA citrus; Penicillium italicum; pathogenicity; RNA interference; cross-kingdom RNAi; Dicer; small RNA
►▼ Show Figures 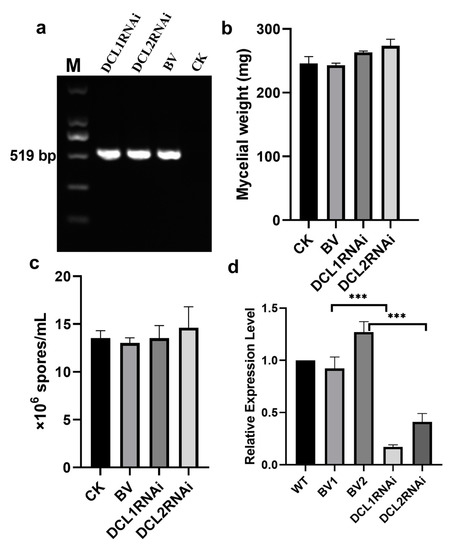