Autophagy in Synucleinopathy: The Overwhelmed and Defective Machinery
Previous Article in Journal

Autophagy transports cytoplasmic material and organelles to lysosomes for degradation and recycling. Beclin 1 forms a complex with several other autophagy proteins and functions in the initiation phase of autophagy, but the exact role of Beclin 1 subcellular localization in autophagy initiation is still unclear. In order to elucidate the role of Beclin 1 localization in autophagosome biogenesis, we generated constructs that target Beclin 1 to the endoplasmic reticulum (ER) or mitochondria. Our results confirmed the proper organelle-specific targeting of the engineered Beclin 1 constructs, and the proper formation of autophagy-regulatory Beclin 1 complexes. The ULK kinases are required for autophagy initiation upstream of Beclin 1, and autophagosome biogenesis is severely impaired in ULK1/ULK2 double knockout cells. We tested whether Beclin 1 targeting facilitated its ability to rescue autophagosome formation in ULK1/ULK2 double knockout cells. ER-targeted Beclin 1 was most effective in the rescue experiments, while mitochondria-targeted and non-targeted Beclin 1 also showed an ability to rescue, but with lower activity. However, none of the constructs was able to increase autophagic flux in the knockout cells. We also showed that wild type Beclin 1 was enriched on the ER during autophagy induction, and that ULK1/ULK2 facilitated the ER-enrichment of Beclin 1 under basal conditions. The results suggest that one of the functions of ULK kinases may be to enhance Beclin 1 recruitment to the ER to drive autophagosome formation. View Full-Text
Keywords: autophagy; Beclin 1; ULK1; ULK2; endoplasmic reticulum; mitochondria autophagy; Beclin 1; ULK1; ULK2; endoplasmic reticulum; mitochondria
►▼ Show Figures 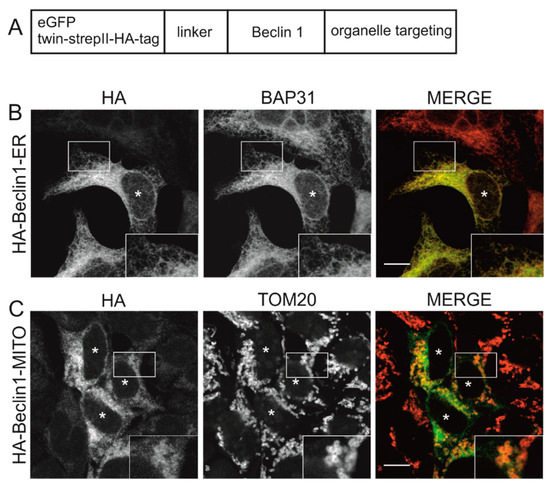