Origin of Nanoscale Incipient Plasticity in GaAs and InP Crystal

Comparative Study of ZnO Nanostructures Grown on Variously Orientated GaN and AlxGa1−xN: The Role of Polarization, and Surface Pits

Through comparing ZnO directly grown on the substrates of a-plane, c-plane, and (11-22) plane GaN and AlxGa1−xN (0.06 ≤ x ≤ 1), the roles of different factors that may influence growth have been studied. Seeded by surface pits, ZnO nanowire (NW) preferentially grew along the polarized direction on top of the nonpolar GaN (laterally aligned), polar GaN and AlGaN (vertically aligned), and semipolar GaN (obliquely upward aligned). Nanosheets were easily formed when the polarized surface of the AlGaN film was not intact. The kinetic effect of polarization must be considered to explain the high aspect ratio of NWs along the polarized direction. It was found that dislocation affected NW growth through the surface pits, which provided excellent nucleation sites. If the surface pits on GaN could be controlled to distribute uniformly, self-organized ZnO NW array could be controllably and directly grown on GaN. Moreover, surface pits could also seed for nanosheet growth in AlN, since Al(OH)4− would presumably bind to the Zn2+ terminated surface and suppress the kinetic effects of polarization. View Full-Text
Keywords: a-plane GaN; c-plane GaN; semipolar GaN; AlxGa1−xN; surface pits; polarization; dislocation a-plane GaN; c-plane GaN; semipolar GaN; AlxGa1−xN; surface pits; polarization; dislocation
►▼ Show Figures 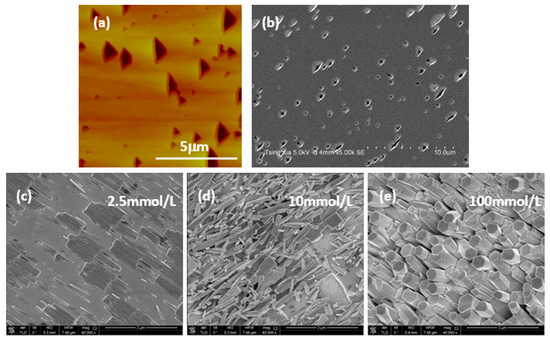