Pycnogenol® (an extract of the bark of French maritime pine tree) is used for dietary supplement and known to have excellent antioxidative efficacy. However, there are few reports on neuroprotective effect of Pycnogenol® supplementation and its mechanisms against ischemic injury following transient forebrain ischemia (TFI) in gerbils. Now, we examined neuroprotective effect and its mechanisms of Pycnogenol® in the gerbils with 5-min TFI, which evokes a significant death (loss) of pyramidal cells located in the cornu ammonis (CA1) region of gerbil hippocampus from 4–5 days post-TFI. Gerbils were pretreated with 30, 40, and 50 mg/kg of Pycnogenol® once a day for 7 days before TFI surgery. Treatment with 50 mg/kg, not 30 or 40 mg/kg, of Pycnogenol® potently protected learning and memory, as well as CA1 pyramidal cells, from ischemic injury. Treatment with 50 mg/kg Pycnogenol® significantly enhanced immunoreactivity of antioxidant enzymes (superoxide dismutases and catalase) in the pyramidal cells before and after TFI induction. Furthermore, the treatment significantly reduced the generation of superoxide anion, ribonucleic acid oxidation and lipid peroxidation in the pyramidal cells. Moreover, interestingly, its neuroprotective effect was abolished by administration of sodium azide (a potent inhibitor of SODs and catalase activities). Taken together, current results clearly indicate that Pycnogenol® supplementation can prevent neurons from ischemic stroke through its potent antioxidative role. View Full-Text
Keywords: antioxidation; antioxidant enzymes; free radicals; ischemia-reperfusion injury; neuroprotection; oxidative stress antioxidation; antioxidant enzymes; free radicals; ischemia-reperfusion injury; neuroprotection; oxidative stress
►▼ Show Figures 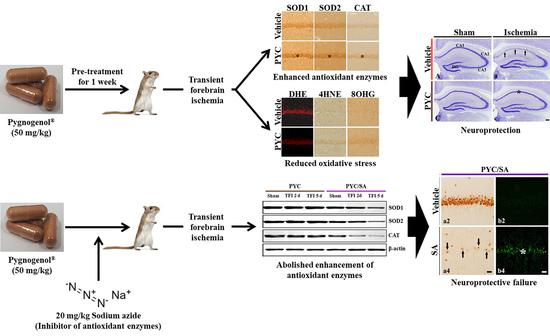