Adverse Impact of Desulfovibrio spp. and Beneficial Role of Anaerostipes spp. on Renal Function: Insights from a Mendelian Randomization Analysis
Next Article in Special Issue

Satellite cells (SC) aid skeletal muscle growth and regeneration. SC-mediated skeletal muscle repair can both be influenced by and exacerbate several diseases linked to a fatty diet, obesity, and aging. The purpose of this study was to evaluate the effects of different lifestyle factors on SC function, including body mass index (BMI), age, and high-fat overfeeding. For this study, SCs were isolated from the vastus lateralis of sedentary young (18–30 years) and sedentary older (60–80 years) men with varying BMIs (18–32 kg/m2), as well as young sedentary men before and after four weeks of overfeeding (OVF) (55% fat/ + 1000 kcal, n = 4). The isolated SCs were then treated in vitro with a control (5 mM glucose, 10% fetal bovine serum (FBS)) or a high substrate growth media (HSM) (10% FBS, 25 mM glucose, and 400 μM 2:1 oleate–palmitate). Cells were assessed on their ability to proliferate, differentiate, and fuel substrate oxidation after differentiation. The effect of HSM was measured as the percentage difference between SCs exposed to HSM compared to control media. In vitro SC function was not affected by donor age. OVF reduced SC proliferation rates (–19% p < 0.05) but did not influence differentiation. Cellular proliferation in response to HSM was correlated to the donor’s body mass index (BMI) (r2 = 0.6121, p < 0.01). When exposed to HSM, SCs from normal weight (BMI 18–25 kg/m2) participants exhibited reduced proliferation and fusion rates with increased fatty-acid oxidation (p < 0.05), while SCs from participants with higher BMIs (BMI 25–32 kg/m2) demonstrated enhanced proliferation in HSM. HSM reduced proliferation and fusion (p < 0.05) in SCs isolated from subjects before OVF, whereas HSM exposure accelerated proliferation and fusion in SCs collected following OVF. These results indicated that diet has a greater influence on SC function than age and BMI. Though age and BMI do not influence in vitro SC function when grown in controlled conditions, both factors influenced the response of SCs to substrate challenges, indicating age and BMI may mediate responses to diet. View Full-Text
Keywords: overfeeding; aging; skeletal muscle overfeeding; aging; skeletal muscle
►▼ Show Figures 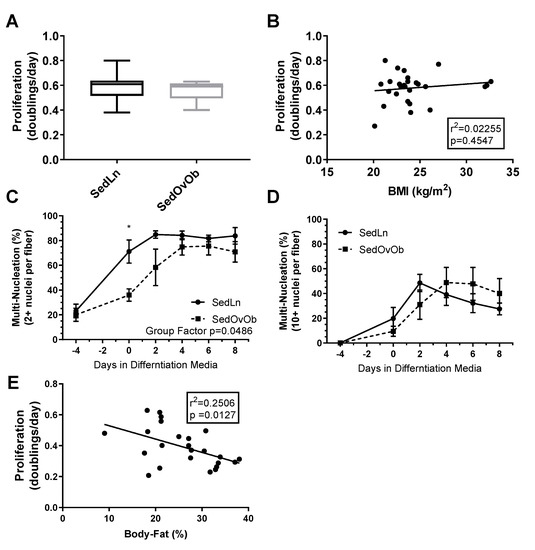