Nutritional Content, Labelling and Marketing of Breakfast Cereals on the Belgian Market and Their Reformulation in Anticipation of the Implementation of the Nutri-Score Front-Of-Pack Labelling System

Objective: Breakfast cereals are frequently consumed in Belgium, especially among children. We investigated the nutritional content, labelling and marketing of breakfast cereals and the changes in nutrient content and reformulation in anticipation of the implementation of the Nutri-Score front-of-pack label. Design: Pictures were taken of cereal packages. The WHO-Europe nutrient profiling tool was used to classify cereals into ‘permitted’/‘not-permitted’ to be marketed to children, while the nutritional quality was assessed using Nutri-Score. The proportion of cereals with nutrition and health claims and/or promotional characters on the front-of-pack was compared between permitted and not-permitted cereals and between different Nutriscore categories using Chi-squared tests. The average nutrient contents per 100g were compared between 2017 and 2018 using paired t-tests. Setting: Belgium. Participants: All breakfast cereals in the major supermarkets (n = 7) in 2017 and 2018. Results: Overall, 330 cereals were included. About 77.2% of cereals were not permitted to be marketed to children but, of those, 22.0% displayed promotional characters. More claims (68.9% of all claims) were found on ‘not-permitted’ compared with ‘permitted’ cereals, particularly nutrition claims. Most claims were displayed on cereals with the allocated Nutri-Score A (42.0%) and C (37.0%). A significant reformulation of cereals was found between 2017 and 2018, with reductions in total sugar (−5%) (p < 0.001) and sodium (−20%) (p = 0.002) and increases in fibre (+3%) (p = 0.012) and proteins (+2%) (p = 0.002). Conclusion: Breakfast cereals on the Belgian market are predominantly unhealthy and frequently carry claims and promotional characters. Minimal reformulation occurred over one year. Policy recommendations include restrictions on claims and marketing for not-permitted cereals. View Full-Text
Keywords: nutri-score; breakfast cereals; claims; marketing; nutritional content; reformulation; Belgium nutri-score; breakfast cereals; claims; marketing; nutritional content; reformulation; Belgium
►▼ Show Figures 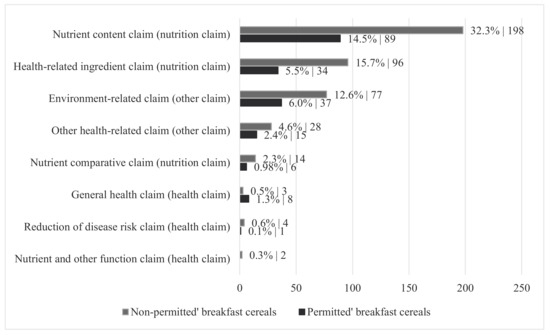 Vermote, M.; Bonnewyn, S.; Matthys, C.; Vandevijvere, S. Nutritional Content, Labelling and Marketing of Breakfast Cereals on the Belgian Market and Their Reformulation in Anticipation of the Implementation of the Nutri-Score Front-Of-Pack Labelling System. Nutrients 2020, 12, 884. https://doi.org/10.3390/nu12040884


Vermote M, Bonnewyn S, Matthys C, Vandevijvere S. Nutritional Content, Labelling and Marketing of Breakfast Cereals on the Belgian Market and Their Reformulation in Anticipation of the Implementation of the Nutri-Score Front-Of-Pack Labelling System. Nutrients. 2020; 12(4):884. https://doi.org/10.3390/nu12040884


Vermote, Marie, Stephanie Bonnewyn, Christophe Matthys, and Stefanie Vandevijvere. 2020. "Nutritional Content, Labelling and Marketing of Breakfast Cereals on the Belgian Market and Their Reformulation in Anticipation of the Implementation of the Nutri-Score Front-Of-Pack Labelling System" Nutrients 12, no. 4: 884. https://doi.org/10.3390/nu12040884