Comment on: “A Systematic Review of Organic Versus Conventional Food Consumption: Is There a Measurable Benefit on Human Health? Nutrients 2020, 12, 7”

Cerebral blood flow (CBF) decreases across the lifespan, and chronic conditions such as dementia and stroke accelerate this decline. Impaired CBF results in reduced delivery of oxygen and nutrients, which can damage the brain over time. Thus, there is a need to identify lifestyle interventions, including diet and exercise, to maintain CBF with aging and in the presence of chronic disease. In the present study, we used transcranial Doppler ultrasound to record middle cerebral artery velocity (MCAv), a surrogate measure of CBF, during moderate-intensity exercise in sedentary, cognitively normal older adults (n = 90). A multiple linear regression model (F(4, 85) = 3.21, p = 0.02) showed that self-reported omega-3 supplement use significantly moderated the association between age and mean exercising MCAv in these individuals (p = 0.01). Older age was associated with lower exercising MCAv in the group not taking omega-3 supplements, while exercising MCAv showed no decline with increasing age in the group who reported omega-3 supplement use. These findings suggest omega-3 supplementation may have an important role in the preservation of CBF with aging. View Full-Text
Keywords: vascular; omega-3; exercise; cerebral blood flow; middle cerebral artery; supplements vascular; omega-3; exercise; cerebral blood flow; middle cerebral artery; supplements
►▼ Show Figures 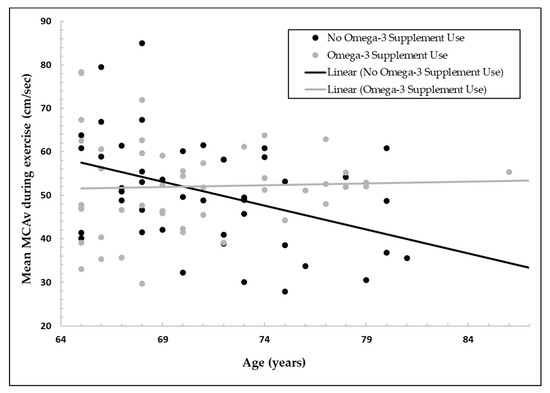