This study examined differences in food and beverage intake estimated from nationally representative surveys of Canadians in 2004 and 2015 collected through the Canadian Community Health Surveys. Differences in mean daily energy intake and amounts of food consumed were compared between 2004 and 2015 and across age groups for all energy reporters (aged 2 years+) and among only plausible energy reporters. From 2004 to 2015, mean energy intake decreased by 228 kcal/day (all energy reporters) and 74 kcal/day (plausible energy reporters). Canadians reported consuming more daily servings of meat and alternatives but fewer servings of vegetables and fruit and milk and alternatives in 2015 compared to 2004. Analyses of food subgroups revealed that Canadians reported consuming more daily servings of dark green and orange vegetables, dairy products, legumes, nuts and seeds, and eggs but fewer servings of potatoes, other vegetables, fruit juices, fluid milk, and sugar-sweetened beverages in 2015 compared to 2004. While some aspects of the Canadian diet have improved, daily mean intake of other nutritious foods either stagnated or worsened over time. Continued attention is needed to improve population-level intakes of vegetables, fruit, whole grains, and protein foods such as legumes, nuts, seeds, and lower fat dairy products. View Full-Text
Keywords: diet surveys; food groups; secular trends; Canada diet surveys; food groups; secular trends; Canada
►▼ Show Figures 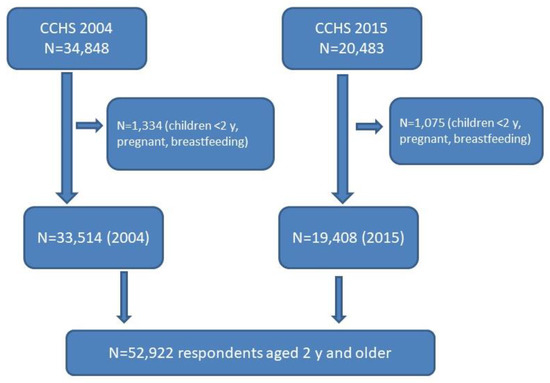