Epidemiological studies have provided ambiguous evidence on the association between vitamin E and esophageal cancer risk. To resolve this controversy, we performed this meta-analysis. The literature was searched by using Excerpta Medica Database (EMBASE), PubMed, the Web of Science, and the Cochrane Library from the inception to April 2018. A random effect model was utilized to calculate the odds ratio (OR) with the 95% confidence interval (95% CI). Twelve articles reporting 14 studies involving 3013 cases and 11,384 non-cases were included. By comparing the highest category with the lowest category of dietary vitamin E intake, we found that dietary vitamin E intake was inversely related to esophageal cancer risk (OR = 0.47, 95% CI: 0.36–0.60). Subgroup analysis revealed that dietary vitamin E intake had a significantly negative association with both the esophageal squamous cell carcinoma risk (OR = 0.29, 95% CI: 0.18–0.44) and the esophageal adenocarcinoma risk (OR = 0.66, 95% CI: 0.49–0.88). No study significantly affected the findings in the sensitivity analysis. Publication bias was discovered, however, the OR (95% CI) remained unchanged after the trim-and-fill analysis. This meta-analysis showed that the higher dietary vitamin E intake is associated with a lower esophageal cancer risk. However, the association still needs to be upheld by more large-scaled randomized controlled trials and prospective studies. View Full-Text
Keywords: dietary; vitamin E; tocopherol; esophageal cancer; meta-analysis dietary; vitamin E; tocopherol; esophageal cancer; meta-analysis
►▼ Show Figures 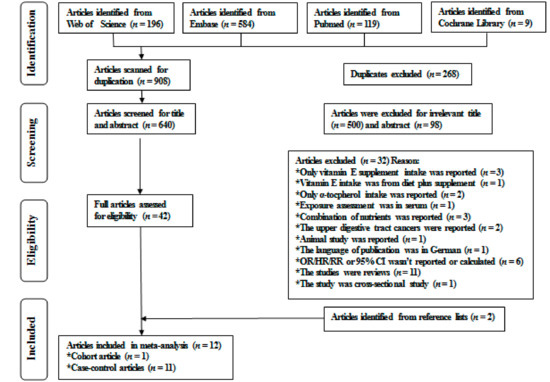