The majority of the EU Member States are well on track to meeting the renewable energy targets laid down in the Renewable Energy Directive (RED). However, for a number of Member States, the achievement of these targets has faced difficulties due to a steeper slope of the trajectory and persistent market barriers. This applies in particular to the development of wind energy. For example, there are several countries and regions within the EU where wind energy deployment rates have been comparatively low so far, despite satisfactory wind harvest conditions [45]. The article considers the case of selected regions in Germany, Spain, Italy, Latvia, Poland and Norway. These countries have been selected because they represent a variety of realities ranging from ample wind energy penetration to very scarce penetration and different socio-economic and cultural conditions and cover the experience of northern as well as southern regions and of two central Eastern European countries. We focused on so-called wind energy scarce regions (WESR), defined as regions with considerably lower than EU average wind energy penetration levels. The selected regions are Saxony and Thuringia in Germany, the Balearic Islands in Spain, Latium and Abruzzo in Italy, most of Latvia, the Warmian-Masurian province in Poland and mid-Norway.
The cumulative capacity of on-shore and off-shore wind energy reached 178.8 GW in EU-28 in 2018, and wind energy met 14% of the annual electricity demand [46]. Latvia and Poland are among those countries with fairly low wind gross electricity penetration levels as compared to the EU average [46]. The same applies to Norway, a member of the European Economic Area. Italy has a penetration level below the EU average, with peaks in some regions like Sicily, Apulia, Sardinia and in general in the South, whilst in the selected regions of Latium and Abruzzo wind energy is largely underdeveloped. Although Germany and Spain have the largest cumulative installed wind energy capacity in Europe and above EU average penetration rates, there are regions even in those two countries which have witnessed low wind energy penetration levels so far, despite satisfactory wind harvest conditions (notably the selected regions Saxony and Thuringia in Germany and the Balearic Islands in Spain).
The number of wind turbines and the total installed capacity (MW) varies significantly between the selected regions. In 2018, the installed capacity reached 1205 and 1573 MW, while the number of turbines was 892 and 863, respectively, in Saxony and Thuringia [47]. In the Balearic Islands, there is only one wind energy project, the Es Mila wind farm, with a total installed capacity of less than 4 MW (four turbines). In 2018, installed capacity was 1695 MW and the number of turbines was 610 in Norway [48]. In Abruzzo, total installed capacity is 264 MW and the number of wind energy plants is 47. In Latium, the total installed capacity is 71 MW and the number of wind energy plants is 69 [49]. In Latvia, the total installed capacity amounted to 66 MW in 2018 [46], while, in the Warmian-Masurian province, total installed capacity was 354 MW and the number of installations was 43 in 2016 [50].
In terms of the share of renewable energy in gross final energy consumption, Norway ranks the highest with 71% renewables in 2017, followed by Latvia (39%), Italy (18%), Spain (17.5%), Germany (15.5%), and Poland (11%) [51]. In Norway, opponents of wind energy point to the fact that Norwegian nature should not be destroyed when the electricity generation is already fully renewable (98% of the electricity production is from renewable energy sources). This is in contrast to, for example, Poland, which is highly dependent on coal and where concerns regarding the social welfare effects of phasing out coal are prevailing. Safeguarding coal interests is therefore more important than climate policy [52]. Both high shares of renewables (e.g., Norway) as well as high shares of fossil fuels (e.g. Poland) may contribute to form opposition to wind energy.

To explore differences and similarities in acceptance-related patterns of wind energy development, we developed a survey which was distributed to stakeholders in the regions covered in this study. The design of the survey is based on work on two fronts. First, we categorized the barriers and drivers identified in the literature on social acceptance in an analytical framework to study community acceptance of specific wind energy projects. The survey included a set of statements designed to capture stakeholders’ evaluation of the extent to which specific acceptance factors constituted a barrier or driver of community acceptance of wind energy development in their region. Second, to ensure that the survey covered factors relevant to community acceptance in the specific regions in the six European countries covered, we relied on activities initiated in the WinWind project in each of the countries. Within the framework of six country desks, market actors, but also authorities, energy agencies, civil society groups and municipalities, engaged in discussing acceptance problems and in searching for practical solutions. The activities carried out yielded important insights into general and region-specific barriers to acceptance.
The acceptance factors covered in the survey are listed in Table 1 below.
Stakeholders were asked to evaluate the level of impact of barriers or drivers in their regions, using a scale from -3 to 3, where the values reflect the assessments described in Table 2 below. The respondents had the option to answer that they view the factor as ‘not relevant’ in the region. They were also given the opportunity to describe factors that prevent or enable wind energy development that were not covered in the survey and solutions that could help promote a socially inclusive uptake of wind energy.
By combining information about stakeholders’ evaluations of the level of impact of each factor with the frequency with which each factor was evaluated as a barrier or driver of community acceptance in the regions, we were able to assess the overall criticality of each factor in shaping community acceptance of wind energy development across the regions covered in this study.

The stakeholder consultations were carried out between May and July 2019. A total of 181 replies were received. Sixty questionnaires were rejected because they were incomplete or because the stakeholders were situated outside the key case regions (in Germany). This gave a net sample of 121 informants.
The list of included stakeholders is not a representative sample of the population, but a selection of stakeholders with specific knowledge about local barriers and drivers of community acceptance in the selected regions. They include representatives from the public administration at local, regional and national levels, politicians at local, regional and national levels, regulators, energy agencies, national electricity producers, regional electricity producers and distributors, local electricity producers and cooperatives, grid companies, project planners/developers, sub-contractors to wind energy developers, renewable energy/wind energy associations, environmental non-governmental organizations (NGOs), other NGOs, researchers and consultants, and others (e.g., farmers and local citizens). The invitations were distributed among both supporters and opponents of wind energy. Some of the stakeholders do not have a particular position in the region but have been invited as they still may have an opinion about the development of wind energy in the region.
The respondents’ affiliation is displayed in Figure 2 and Table 3 below. A total of 35% of the stakeholders work in national, regional and local public administrations. In the Warmian-Masurian province and the Balearic Islands, these stakeholders are all at the local level. In Norway and Latvia there are also several NGO representatives included in the panel, both environmental NGOs and other NGOs. In Germany, more than half of the stakeholders were project planners or developers.

The surveys carried out in the six countries were not intended to be statistically representative, but as an additional consultation of stakeholders, which was intended to tie in with the discussion content of the activities in the country desks of the project WinWind. When interpreting the data, certain methodological limitations need to be taken into account. First, the number of responses is comparatively low, which makes it difficult to derive statistically robust correlations. However, our ambition was rather to consult stakeholders and to draw tentative conclusions regarding similarities and differences in perceptions and preferences between regions. Stakeholder and expert opinions and the opinions of the local population in host communities do not necessarily coincide. Therefore, a more complete picture of acceptance drivers and barriers might be obtained if stakeholder and expert estimations were complemented by public surveys in the target regions or host communities.

4.2. The Criticality of Social Acceptance Barriers and Drivers

4.2.1. The Criticality of Social Acceptance Barriers

4.2.2. The Criticality of Social Acceptance Drivers

Fifteen factors have a rounded average score across regions of +1, which indicates that the factor has a small but positive effect on acceptance.
In terms of criticality, impacts on GHG emissions—an environmental factor—has the highest impact score (average across regions of 1.4), but the factor was not evaluated as a driver by all regions (the frequency score is 5). The economic factor impacts on local profits and income generation has an impact score of 1.2, slightly lower than the score assigned to impacts on GHG emissions, but a frequency score of 6. The degree of local ownership of the plants has an average impact score of 1.0 and a frequency score of 6. Information about projects and the transparency of the permitting process has an overall impact score of 1.0, and a frequency score of 5. The other drivers have average scores between 0.5 and 0.9, and were reported as a driver by an increasing number of regions with increasing scores.
The criticality of the different acceptance factors is summarized in Figure 4. The figure shows that, compared to the drivers, the critical barriers to social acceptance are relatively few. Nevertheless, most critical acceptance factors identified are barriers.
Figure 5 below shows average scores across regions for each of the 34 acceptance factors. Impacts on the physical environment have the largest negative effect on acceptance across regions, while impacts on GHG emissions have the largest positive effect. Both are environmental factors.

This contribution is part of the WinWind project, which has received funding from the European Union’s Horizon 2020 Research and Innovation programme under Grant Agreement N° 764717.

We thank three anonymous reviewers for providing helpful feedback. We are grateful to our colleagues Elena De Luca, Nicoletta del Bufalo, Tania Giuffrida, Ivars Kudrenickis, Pouyan Maleki-Dizaji, Piotr Nowakowski, Maria Cristina Tommasino, Ryszard Wnuk, Gabi Zink Ehlert, Swantje Vondran, Aija Zucika and Rune Flatby for their contributions to earlier reports that we draw on in this paper (Deliverable 2.1: Technical and socio-economic conditions and Deliverable 2.3: Taxonomy of social acceptance drivers and barriers) as well as for translating and distributing the survey to relevant stakeholders in their regions. We would also like to thank the stakeholders, who have taken their time to respond to our survey. We also appreciate the feedback from the participants, and in particular the discussant Eva Eichenauer, of the panel ‘P194: Local environmental concerns vs. climate: Increasing societal polarization in energy policy’ at the General ECPR Conference 2019, 6 September 2019, Wroclaw, Poland. 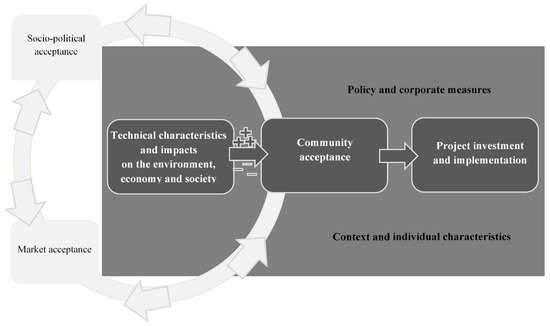 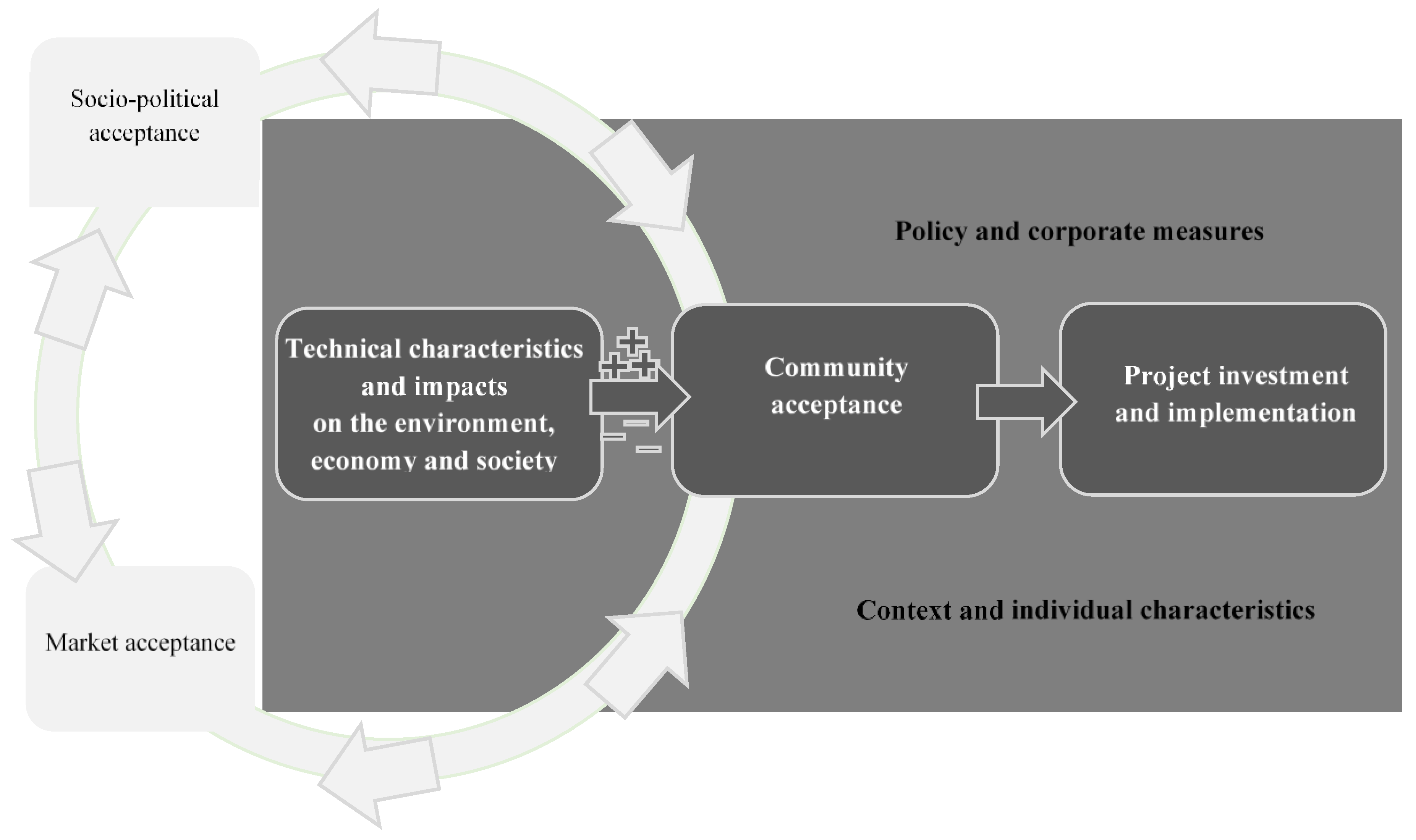 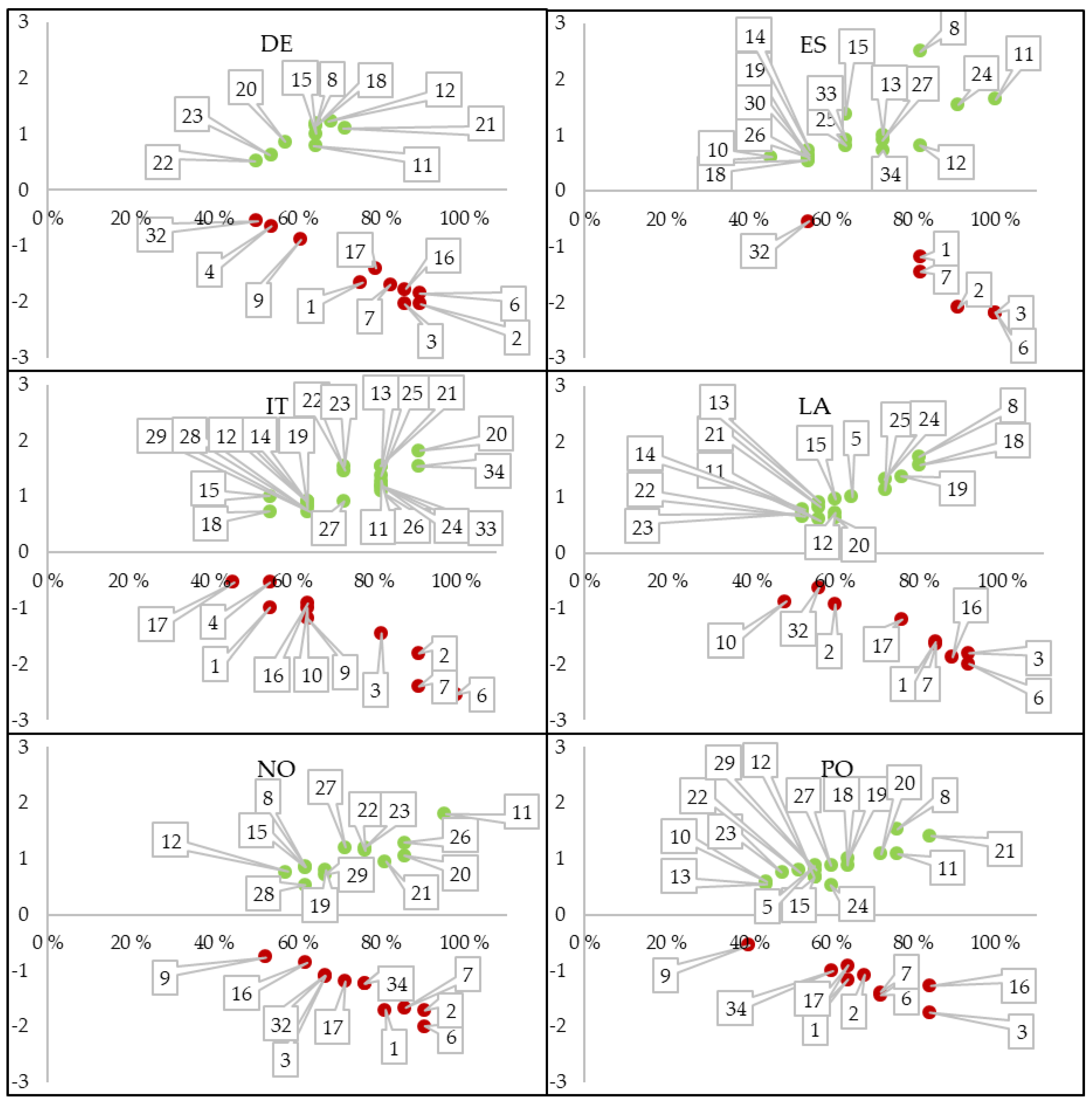