Challenges in Laboratory Diagnosis of the Novel Coronavirus SARS-CoV-2

The Nuclear Pore Complex: A Target for NS3 Protease of Dengue and Zika Viruses

During flavivirus infection, some viral proteins move to the nucleus and cellular components are relocated from the nucleus to the cytoplasm. Thus, the integrity of the main regulator of the nuclear-cytoplasmic transport, the nuclear pore complex (NPC), was evaluated during infection with dengue virus (DENV) and Zika virus (ZIKV). We found that while during DENV infection the integrity and distribution of at least three nucleoporins (Nup), Nup153, Nup98, and Nup62 were altered, during ZIKV infection, the integrity of TPR, Nup153, and Nup98 were modified. In this work, several lines of evidence indicate that the viral serine protease NS2B3 is involved in Nups cleavage. First, the serine protease inhibitors, TLCK and Leupeptin, prevented Nup98 and Nup62 cleavage. Second, the transfection of DENV and ZIKV NS2B3 protease was sufficient to inhibit the nuclear ring recognition detected in mock-infected cells with the Mab414 antibody. Third, the mutant but not the active (WT) protease was unable to cleave Nups in transfected cells. Thus, here we describe for the first time that the NS3 protein from flavivirus plays novel functions hijacking the nuclear pore complex, the main controller of the nuclear-cytoplasmic transport. View Full-Text
Keywords: dengue; nuclear pore complex; nucleus; zika; NS3 dengue; nuclear pore complex; nucleus; zika; NS3
►▼ Show Figures 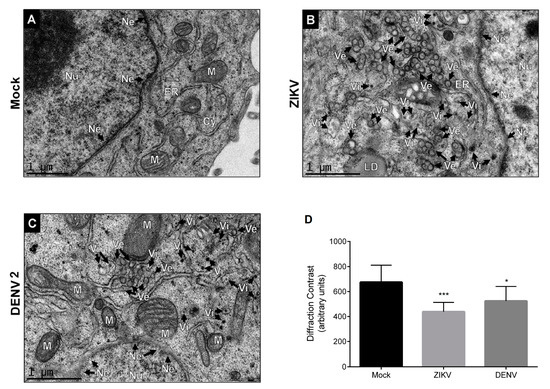