The objective was to quantify the influence of thinning, high pruning and slash management on crop tree and stand growth in young even-aged stands of planted silver birch (Betula pendula Roth). This study was based on two field experiments, aged six and eleven years at initiation and re-measured after six and eight years, respectively. Treatments included the unthinned control, moderate thinning mainly from below (removing 28–33% of standing volume), point thinning to favor 300 trees per ha and with no thinning elsewhere in the plot (removing 16–25%), and heavy thinning leaving 600 evenly distributed potential future crop trees per ha (removing 64–75%). Slash management (extraction or retention) was applied to heavily thinned plots. High pruning removing 30–70% of the green crown was carried out in some plots with point or heavy thinning on 300 or 600 trees per ha, respectively. Stand volume growth increased with increasing pre-treatment mean annual volume increment and decreased with increasing thinning intensity as compared to the unthinned control. LS-means estimates indicated a reduction for moderate thinning by 14%, for point thinning by 12% and for heavy thinning (combined with pruning) by 62%. However, in the youngest experiment, heavy thinning (without pruning) reduced growth by 54%. Combining these results with results from a similar experiment in Canada, the reduction in stand volume growth (RedIv%) depending on thinning removal (RemV%), both expressed as a percentage of the unthinned control, was quantified as RedIv% = −23.67 + 1.16·RemV% (calibration range: 30–83%). For heavy thinning (large quantities of slash), slash extraction resulted in no reduction in stand volume growth as compared to slash retention. The instantaneous numeric reduction in the average stem diameter of the 300 thickest trees per ha (D300) due to thinning was 3.5, 15–21% and 955–11% with moderate, point and heavy thinning, respectively. The subsequent average annual increase in D300 during the observation period was 8.5%, 25 and 18%, respectively. In the youngest experiment, pruning in unthinned plots led to a reduction in the annual increase of D300 by 14%, and heavy thinning in unpruned plots led to an increase by 30%. The growth of pre-selected potential future crop trees increased with increasing thinning intensity. In heavily thinned plots, pruning reduced growth increasingly with increasing pruning severity; LS-means estimates indicated 21% larger growth on stem diameter for unpruned trees and 3% for pruned trees. As an adverse side effect, heavily thinned plots with only 600 trees per ha were at increased risk of windthrow for some years after the thinning intervention. In the oldest experiment, 95–21% of the trees in these plots were damaged by wind. View Full-Text
Keywords: thinning; pruning; slash; windthrow; wind stability; potential future crop trees; tree growth; stand growth; birch; Sweden thinning; pruning; slash; windthrow; wind stability; potential future crop trees; tree growth; stand growth; birch; Sweden
►▼ Show Figures 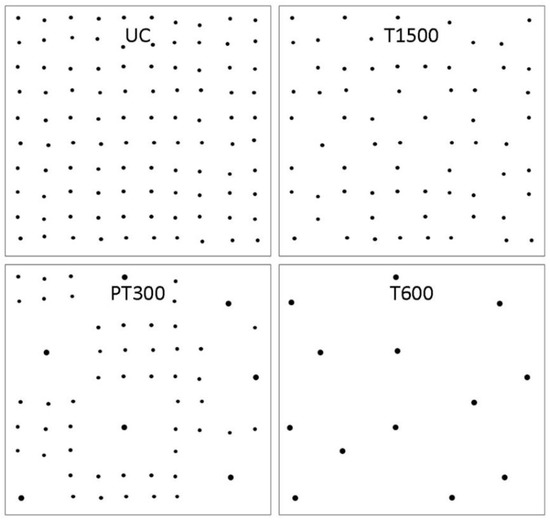