Nanostructured films with electrical conductivity in the semiconductor region were prepared in a polymeric matrix of poly(vinyl alcohol) (PVA) with nanostructures of chitosan-gold nanoparticles (AuNPs)/single-wall carbon nanotubes carboxylic acid functionalized (SWCNT-COOH) (chitosan-AuNPs/SWCNT-COOH) self-assembled. Dispersion light scattering (DLS) was used to determine the average particle sizes of chitosan-AuNPs, z-average particle size (Dz) and number average particle size (Dn), and the formation of crystalline domains of AuNPs was demonstrated by X-ray diffraction (XRD) patterns and observed by means of transmission electron microscopy (TEM). The electrostatic interaction was verified by Fourier transform infrared spectroscopy (FTIR). The electrical conductivity of PVA/chitosan-AuNPs/SWCNT-COOH was determined by the four-point technique and photocurrent. The calculated Dn values of the chitosan-AuNPs decreased as the concentration of gold (III) chloride trihydrate (HAuCl4·3H2O) increased: the concentrations of 0.4 and 1.3 mM were 209 and 90 nm, respectively. Average crystal size (L) and number average size (D) of the AuNPs were calculated in the range of 13 to 24 nm. Electrical conductivity of PVA/chitosan-AuNPs/SWCNT-COOH films was 3.7 × 10−5 σ/cm determined by the four-point technique and 6.5 × 10−4 σ/cm by photocurrent for the SWCNT-COOH concentration of 0.5 wt.% and HAuCl4·3H2O concentration of 0.4 mM. In this investigation, the protonation of the amine group of chitosan is fundamental to prepare PVA films with nanostructures of self-assembled chitosan-AuNPs/SWCNT-COOH. View Full-Text
Keywords: gold nanoparticles; self-assembly; nanostructures; films; electrical properties gold nanoparticles; self-assembly; nanostructures; films; electrical properties
►▼ Show Figures 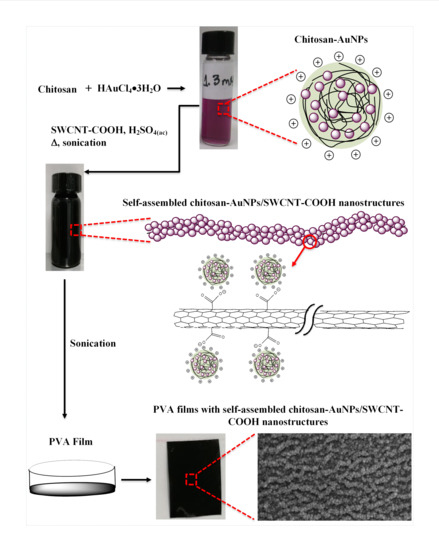