Glioblastoma is the most aggressive and lethal brain cancer. Current treatments involve surgical resection, radiotherapy and chemotherapy. However, the life expectancy of patients with this disease remains short and chemotherapy leads to severe adverse effects. Furthermore, the presence of the blood–brain barrier (BBB) makes it difficult for drugs to effectively reach the brain. A promising strategy lies in the use of graphene quantum dots (GQDs), which are light-responsive graphene nanoparticles that have shown the capability of crossing the BBB. Here we investigate the effect of GQDs on U87 human glioblastoma cells and primary cortical neurons. Non-functionalized GQDs (NF-GQDs) demonstrated high biocompatibility, while dimethylformamide-functionalized GQDs (DMF-GQDs) showed a toxic effect on both cell lines. The combination of GQDs and the chemotherapeutic agent doxorubicin (Dox) was tested. GQDs exerted a synergistic increase in the efficacy of chemotherapy treatment, specifically on U87 cells. The mechanism underlying this synergy was investigated, and it was found that GQDs can alter membrane permeability in a manner dependent on the surface chemistry, facilitating the uptake of Dox inside U87 cells, but not on cortical neurons. Therefore, experimental evidence indicates that GQDs could be used in a combined therapy against brain cancer, strongly increasing the efficacy of chemotherapy and, at the same time, reducing its dose requirement along with its side effects, thereby improving the life quality of patients. View Full-Text
Keywords: graphene; quantum dots; glioblastoma; neurons; doxorubicin graphene; quantum dots; glioblastoma; neurons; doxorubicin
►▼ Show Figures 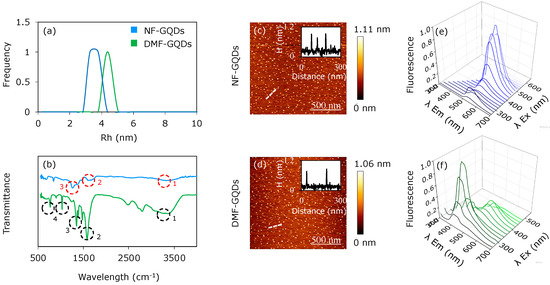