Nanocomposites exhibit a high dielectric strength, whereas microcomposites exhibit a high thermal conductivity. In this study, good insulating materials were developed on the basis of the synergetic effect of micro- and nanoparticles, which were used as inorganic fillers. With a double-melting blend, nano-ZnO/low density polyethylene (LDPE), micro-ZnO/LDPE, and micro-nano-ZnO/LDPE composites were prepared, according to the scanning electron microscope test, polarization microscope test, conductivity test, breakdown test, and dielectric spectrum test, the dielectric property of micro-nano-ZnO/LDPE was explored. The SEM test results showed that by adding a suitable proportion of ZnO particles, the inorganic particles could disperse uniformly without reuniting. The PLM test results showed that the micro- and nano-ZnO particles adding decreased the crystal size. The arrangement was regular and tight. The macroscopic results showed that the mass fraction of nanoparticles and microparticles were 3% and 2%, the samples conductivity was the lowest. The breakdown field strength of the nanocomposites increased. The breakdown field strength of nanocomposites with 1%, 3%, and 5% nanoparticle contents were 5%, 15%, and 10% higher than that of pure LDPE. The addition of inorganic particles resulted in new polarization modes: Ionic displacement polarization and interfacial polarization. The ZnO/LDPE composites exhibited a higher dielectric constant and dielectric loss factor than pure LDPE. However, with the increasing frequency, it took considerable time to attain interfacial polarization in the nanocomposite and micro-nanocomposite, thus decreasing the dielectric constant. View Full-Text
Keywords: LDPE; dispersive; electrical conductivity; breakdown properties LDPE; dispersive; electrical conductivity; breakdown properties
►▼ Show Figures 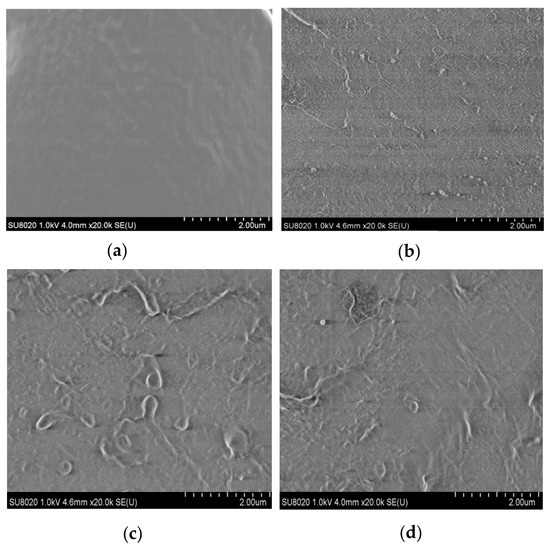