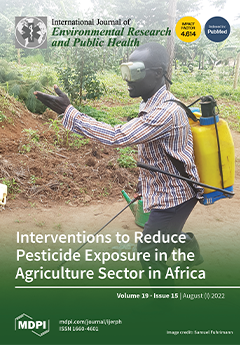 Cover Story (view full-size image): There is limited evidence regarding which specific interventions are effective in reducing pesticide exposure and associated risks to human health and ecology. To better understand ongoing research and public health activities, a systematic review of the corresponding scientific literature was conducted, followed by a qualitative survey among stakeholders involved in pesticide research or management in the African region an international workshop. To learn about barriers to and promoters of successful interventions, a broad range of occupational and environmental health risk topics were discussed. Several key areas of improvement were identified in relation to acute poisoning, street pesticides, switching to alternatives, or disposal of empty pesticide containers. View this paper
Previous Issue
Volume 19, July-2
Next Issue
Volume 19, August-2
We use cookies on our website to ensure you get the best experience. Read more about our cookies here.
Accept
We have just recently launched a new version of our website. Help us to further improve by taking part in this short 5 minute survey here. here.
Never show this again