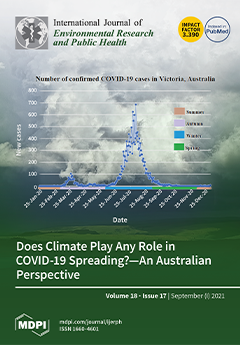 Cover Story (view full-size image): Does climate play a role in the spread of COVID-19? Using Australian case studies from January to October 2020, we found that the maximum and average UVI and solar exposure positively correlate with COVID-19 case numbers after one and 19 days, whereas these factors revealed a negative association after five days. Minimum temperature showed a negative association after one day, but a positive correlation after 21 days. These findings may reflect the time required for SARS-CoV-2 to show up on RTPCR tests. The findings may also be related to changes in activity due to climate. Other weather attributes require exploration, as does the impact of COVID-19 variants and government-imposed restrictions. If outside activities that are facilitated by sunshine and warmer weather impact viral spread, this must be factored into any future management strategy. View this paper.
Previous Issue
Volume 18, August-2
Next Issue
Volume 18, September-2
We use cookies on our website to ensure you get the best experience. Read more about our cookies here.
Accept
We have just recently launched a new version of our website. Help us to further improve by taking part in this short 5 minute survey here. here.
Never show this again