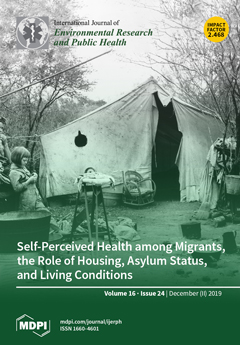 Cover Story (view full-size image): The health of migrants is a widely studied topic. It has been argued that migrant health may deteriorate over time. Though migrants are a “hard to reach” population in survey data, this paper builds on a unique dataset provided by Médecins du Monde from five countries. We study self-perceived health (SPH) in connection with socioeconomic and demographic factors and length of stay. Results differ for men and women. Compared to other documented migrants, asylum seekers have a 50%–70% greater chance of having worse health. Migrants with better living conditions have a 57%–78% chance of being in better health. Male migrants with a job have a between 82% and 116% chance of being in good health. This paper contributes widely to the knowledge of health of migrants. View this paper
Previous Issue
Volume 16, December-1
Next Issue
Volume 17, January-1
We use cookies on our website to ensure you get the best experience. Read more about our cookies here.
Accept
We have just recently launched a new version of our website. Help us to further improve by taking part in this short 5 minute survey here. here.
Never show this again