The Association between Children’s and Parents’ Co-TV Viewing and Their Total Screen Time in Six European Countries: Cross-Sectional Data from the Feel4diabetes-Study
Previous Article in Journal

Impacted by ongoing climate change and anthropogenic activities, large seasonal lakes experience water regime evolution, which raises challenges for the management of water resources and environment. The water regime evolution refers to the spatial and temporal alterations in the hydrological features of lakes. Characterizing the lake water regime and its alteration may help policymakers design effective adaption strategies. Therefore, total 47 hydrological indicators were proposed, considering intra-annual fluctuations, flood and drought features, and rate and frequency of water level variations. Combined with Mann-Kendall algorithm and Sen’s slope, the indicators were applied in Poyang Lake, a typically large seasonal lake in China, as a case study. The results revealed temporal and spatial variations in different hydrological indicators. The most dramatic alteration was the water level decline in October and November over the entire study phase, especially over the past 30 years. This was an urgent environmental problem that Poyang Lake faced, partially caused by the increased hydraulic gradient between southern and northern lake. It could trigger the drought occurring earlier, prolong the drought duration, and impair the wetland ecosystem. Environmental water requirements of both Poyang Lake and Yangtze River were suggested for regional sustainable development. The application in Poyang Lake showed the practicability and reliability of the indicators, which are applicable in international seasonal lakes. The series of indicators can be used in whole or in part, determined by the ecohydrological characters of a specific lake and the research objectives. View Full-Text
Keywords: seasonal lakes; water regime; indicators; evolution; spatio-temporal variations; environmental problem; Poyang Lake seasonal lakes; water regime; indicators; evolution; spatio-temporal variations; environmental problem; Poyang Lake
►▼ Show Figures 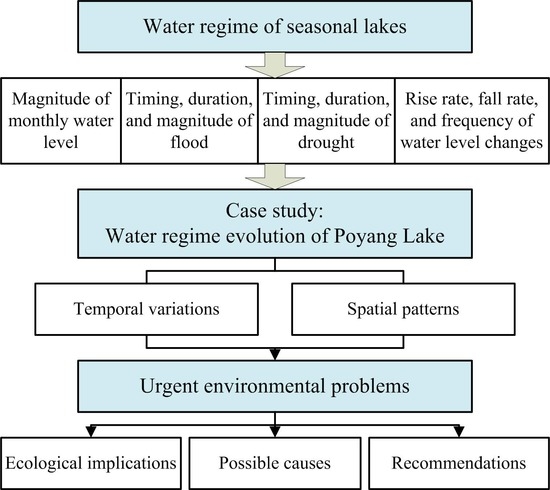