Cellular Energy Allocation to Assess the Impact of Nanomaterials on Soil Invertebrates (Enchytraeids): The Effect of Cu and Ag
Previous Article in Special Issue

:
The land, water, and energy requirements of hydroponics were compared to those of conventional agriculture by example of lettuce production in Yuma, Arizona, USA. Data were obtained from crop budgets and governmental agricultural statistics, and contrasted with theoretical data for hydroponic lettuce production derived by using engineering equations populated with literature values. Yields of lettuce per greenhouse unit (815 m2) of 41 ± 6.1 kg/m2/y had water and energy demands of 20 ± 3.8 L/kg/y and 90,000 ± 11,000 kJ/kg/y (±standard deviation), respectively. In comparison, conventional production yielded 3.9 ± 0.21 kg/m2/y of produce, with water and energy demands of 250 ± 25 L/kg/y and 1100 ± 75 kJ/kg/y, respectively. Hydroponics offered 11 ± 1.7 times higher yields but required 82 ± 11 times more energy compared to conventionally produced lettuce. To the authors’ knowledge, this is the first quantitative comparison of conventional and hydroponic produce production by example of lettuce grown in the southwestern United States. It identified energy availability as a major factor in assessing the sustainability of hydroponics, and it points to water-scarce settings offering an abundance of renewable energy (e.g., from solar, geothermal, or wind power) as particularly attractive regions for hydroponic agriculture.
Keywords:
agriculture; hydroponics; sustainability; water; energy; land use; lettuce; Arizona 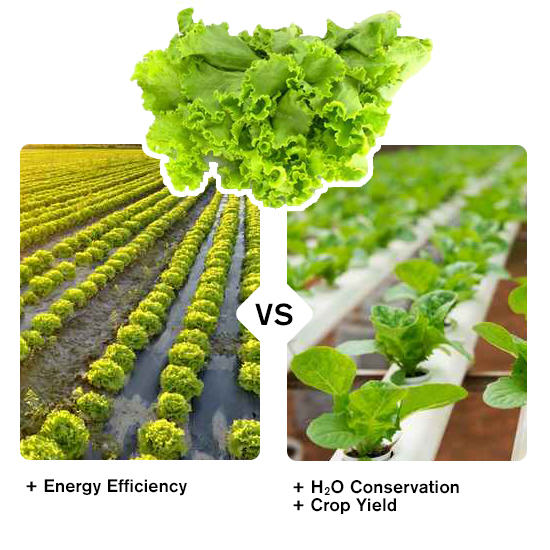 Conventional agricultural practices can cause a wide range of negative impacts on the environment. “Conventional” or “modern industrial agriculture” has been historically defined as the practice of growing crops in soil, in the open air, with irrigation, and the active application of nutrients, pesticides, and herbicides. Some of the negative impacts of conventional agriculture include the high and inefficient use of water, large land requirements, high concentrations of nutrients and pesticides in runoff, and soil degradation accompanied by erosion [1,2]. As the world population continues to grow at a rapid rate, so too must the food production. However, approximately 38.6% of the ice-free land and 70% of withdrawn freshwater is already devoted to agriculture [3,4]. To sustainably feed the world’s growing population, methods for growing food have to evolve.
The benefits of hydroponic agriculture are numerous. In addition to higher yields and water efficiency, when practiced in a controlled environment, hydroponic systems can be designed to support continuous production throughout the year [5]. Hydroponic systems are very versatile and can range from rudimentary backyard setups to highly sophisticated commercial enterprises. Various commercial and specialty crops can be grown using hydroponics including tomatoes, cucumbers, peppers, eggplants, strawberries, and many more. Leafy vegetables, such as lettuce can also be grown hydroponically and perform best using the nutrient film technique (NFT) [6]. Hydroponic NFT production involves the circulation of a nutrient solution through shallow channels in a closed-loop system [7].
In 2012, in terms of production by weight, head lettuce was the second largest vegetable crop in the Unites States, second only to onions [8]. A substantial portion of that production (approximately 29% in 2012) occurs in Arizona, primarily in Yuma [8,9]. Since Arizona devotes approximately 69% of its current freshwater withdrawals to agriculture [10], investigations into hydroponic alternatives could be beneficial in reducing the strain on water resources in such regions. There is considerable research available regarding conventional lettuce production and hydroponic lettuce production separately, but few studies that have compared the resource inputs of the two at a commercial level.
Regarding conventional lettuce production, in 2001, the University of Arizona Cooperative Extension developed county-specific crop budgets estimating the operating and ownership costs of producing vegetables in Arizona using representative cropping operations and such resource inputs as water, fuel, and fertilizer [11]. Realizing that the water and energy use for agriculture is substantial, Ackers et al. (2008) [12] performed an “order of magnitude” study and determined a reasonable range of estimates for resources used in the production of Arizona agriculture.
Regarding hydroponics, the Ohio State University developed an enterprise model designed to estimate the revenue, expenses, and profitability associated with a typical hydroponic greenhouse lettuce production system in Ohio [13]. Various other authors have investigated components of hydroponic lettuce production as it relates to water and energy inputs [14,15].
The objective of this study is to determine whether hydroponic lettuce production is a suitable and more sustainable alternative to conventional lettuce production in Arizona. For this study, “a suitable and more sustainable alternative” is one that outperforms (i.e., is more efficient than) conventional agriculture in the metrics of land use, water use, and energy use, normalized by yield.

Metrics for land, water, and energy use were developed for conventional lettuce production and hydroponic lettuce production using a southwestern Arizona location as a case study scenario. Data related to conventional lettuce production was obtained from crop budgets and governmental agricultural statistics, while data regarding the hydroponic production of lettuce was developed using engineering equations and values reported in literature which were then applied to a hypothetical 815 square meter enclosed hydroponic greenhouse located in Yuma, Arizona. This greenhouse was assumed to be using the nutrient film technique of growing hydroponic lettuce, have temperature controls, supplemental artificial lighting, and water circulation pumps.

The average yield of head lettuce per acre in Arizona was quantified by taking the average of the past ten years of agricultural census data (2003–2012) that was available from the National Agricultural Statistics Service (NASS) for the United States Department of Agriculture (USDA) [8,16,17,18,19]. The resulting value was then converted into units of kilograms per square meter per year (kg/m2/y).

The water usage related to the conventional production of head lettuce in Arizona was estimated using county-specific crop budgets developed by the University of Arizona Cooperative Extension. Specifically, the two Yuma County crop budgets for head lettuce were used to produce an average estimate of irrigation use of 965 L per square meter per crop [11]. The average value was then converted to liters per kilogram per year (L/kg/y) using the estimated average yield value for conventional lettuce and assuming one crop of lettuce per year.

The average yield of head lettuce grown using hydroponic methods was estimated by evaluating values reported in available literature. Databases searched included; AGRICOLA, Web of Science, Google Scholar, and Science Direct, using keywords “hydroponics” and “head lettuce.” Only publications that contained the necessary information regarding yield, type of hydroponic system (e.g., NFT), configuration, production area, and greenhouse area were used. Once the information was gathered, the data was standardized.
Configurations from three studies were averaged to get an approximate plant density of 24 plants per square meter of greenhouse [7,13,20]. With supplemental artificial lighting and temperature controls lettuce production can be continuous year round, with a full harvest cycle completed every 30 days (or approximately 12 harvests per year) [13]. The mass of edible lettuce per plant was averaged from two sources to get an average mass of 144.6 grams per plant [13,21]. Using the estimates for plant density, number of harvests, and plant mass, the average yield of hydroponic lettuce per year was calculated in units of kg/m2/y.

The water usage related to the hydroponic production of head lettuce in Arizona was estimated by considering the average evapotranspiration of each individual plant, which takes into account the water loss due to evaporation and transpiration. Both (2014) [22] reported that lettuce plants grown hydroponically must transpire at least 400 mL per gram of dry mass accumulated to avoid tipburn damage. Using a ratio of dry mass to fresh mass of 0.045 [22] and the average mass per head of lettuce calculated previously, the average evapotranspiration per plant was calculated. This value was then conservatively increased by an additional 10% to account for periodic flushing of the nutrient solution. This estimate was used in combination with the estimated yield values for hydroponic lettuce to create an average estimate of water usage in units of L/kg/y. 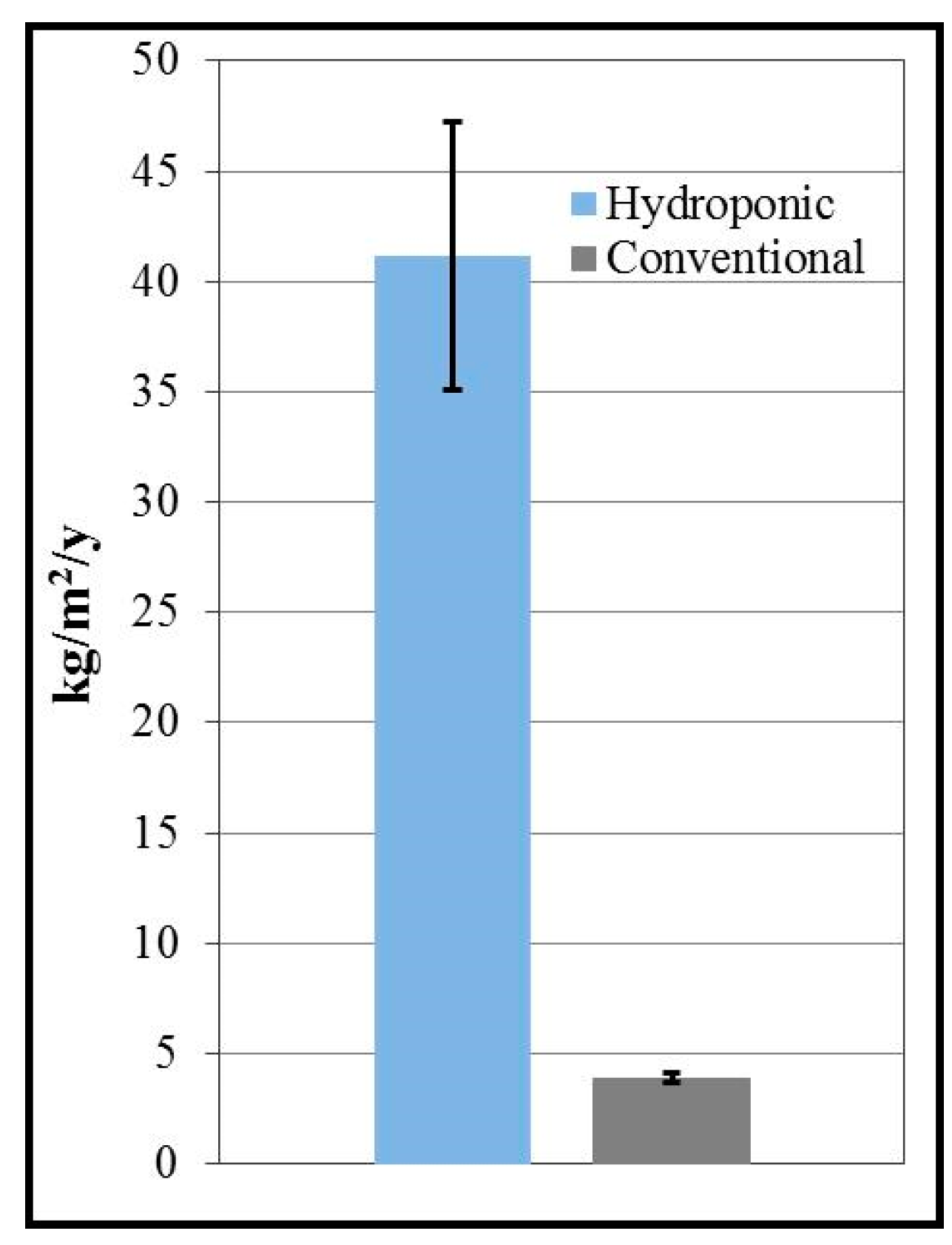 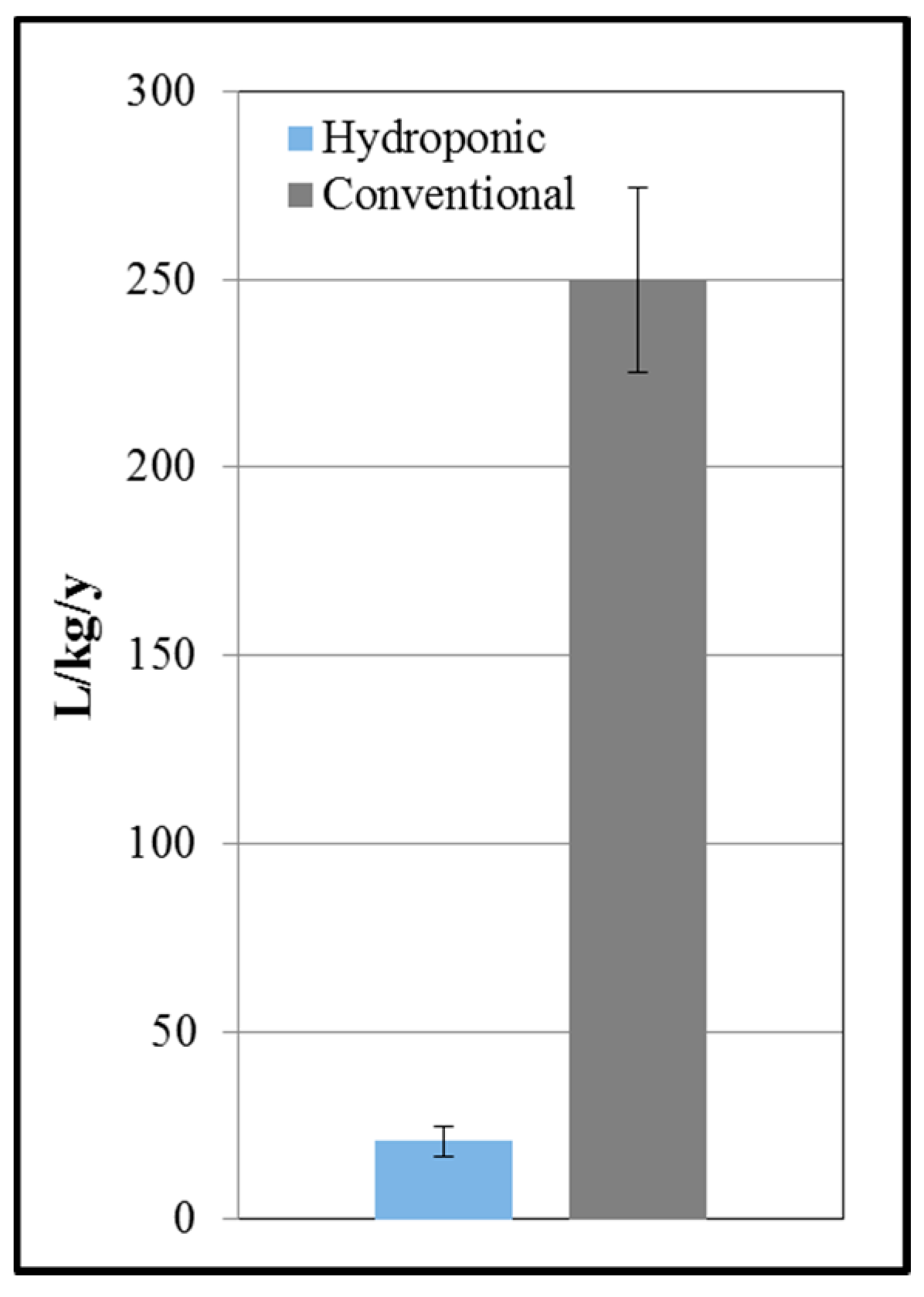 Despite its high demand for energy, hydroponics remains a promising technology. Several factors could influence the feasibility of hydroponic production of crops, specifically lettuce, in the future. As more sophisticated control devices become available, the cost of maintaining the controlled environment of hydroponic greenhouses could decrease. The future availability of water, land, and food will also influence feasibility through increased demand. Increasing land and water scarcity will make the more land- and water-efficient hydroponic systems more appealing to city planners. Government and local grass-roots support could also influence the future of hydroponic farming, as subsidies could be used to offset the high initial cost of hydroponic infrastructure or more simplified hydroponic systems take hold.
At this point in time, hydroponic farming of lettuce cannot be deemed a more sustainable alternative to conventional lettuce farming techniques, but it provides promising concepts that could lead to more sustainable food production. In summary, hydroponic gardening of lettuce uses land and water more efficiently than conventional farming and could become a strategy for sustainably feeding the world’s growing population, if the high energy consumption can be overcome through improved efficiency and/or cost-effective renewables.

The authors of this study would like to gratefully acknowledge Alizée Jenck for her time, guidance, and feedback.

Guilherme Lages Barbosa, Francisca Daiane Almeida Gadelha, Natalya Kublik, Alan Proctor, Lucas Reichelm, Emily Weissinger, and Gregory M. Wohlleb contributed equally by performing the literature review, conducting the modeling analysis, and co-writing the manuscript. Rolf U. Halden directed the research and supervised the co-authors who completed this work in partial fulfillment of the requirements of the Fall 2014 Arizona State University course HON490-CEE470/570. All authors have given approval to the final version of the manuscript.