The ground motion of an earthquake or the ambient motion of a large engineered structure not only has translational motion, but it also includes rotation around all three axes. No current sensor can record all six components, while the fusion of individual instruments that could provide such recordings, such as accelerometers or Global Navigation Satellite System (GNSS) receivers, and rotational sensors, is non-trivial. We propose achieving such a fusion via a six-component (6C) Kalman filter (KF) that is suitable for structural monitoring applications, as well as earthquake monitoring. In order to develop and validate this methodology, we have set up an experimental case study, relying on the use of an industrial six-axis robot arm, on which the instruments are mounted. The robot simulates the structural motion resulting atop a wind-excited wind turbine tower. The quality of the 6C KF reconstruction is assessed by comparing the estimated response to the feedback system of the robot, which performed the experiments. The fusion of rotational information yields significant improvement for both the acceleration recordings but also the GNSS positions, as evidenced via the substantial reduction of the RMSE, expressed as the difference between the KF predictions and robot feedback. This work puts forth, for the first time, a KF-based fusion for all six motion components, validated against a high-precision ground truth measurement. The proposed filter formulation is able to exploit the strengths of each instrument and recover more precise motion estimates that can be exploited for multiple purposes. View Full-Text
Keywords: collocated vibration measurements; accelerometer; GNSS; rotational sensor; Kalman filter; data fusion; structural monitoring; wind turbine; seismology; robot collocated vibration measurements; accelerometer; GNSS; rotational sensor; Kalman filter; data fusion; structural monitoring; wind turbine; seismology; robot
►▼ Show Figures 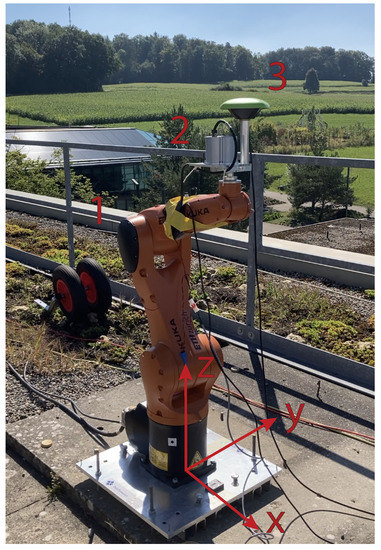