An Update on the Invasion of Weakfish Cynoscion regalis (Bloch & Schneider, 1801) (Actinopterygii: Sciaenidae) into Europe

New information on weakfish introduction vectors, its invasive status, distribution, and use as a fishing resource arose after the publication of “The transatlantic introduction of weakfish Cynoscion regalis (Bloch & Schneider, 1801) (Sciaenidae, Pisces) into Europe” by Morais and Teodósio (2016). Currently, the first known report of weakfish in Europe dates back to September 2009, with a specimen captured in the Schelde estuary (Belgium/The Netherlands). This fact suggests that weakfish could have been introduced into Europe via multiple and independent ballast water introduction events, and not through a point-source introduction event with subsequent dispersion as previously hypothesized. It is also unlikely that Schelde weakfish migrated southwards to colonize Iberian aquatic ecosystems. Weakfish have established a population in the Gulf of Cádiz region and have already reached an invasive status in the Sado estuary (Portugal). Weakfish were also captured in several other locations along the Portuguese coast, including the Tagus and Mira estuaries at least since 2013 or 2014, and the Ria Formosa lagoon in 2017. Tagus anglers caught weakfish specimens of ~1 kg and ~40 cm in November 2016, which corresponds to fish of 3+ years of age in the native range. The presence of weakfish in the Tagus estuary is still fairly unknown to local anglers. Sado weakfish has already been sold in local fish markets in southern Portugal for 3 to 10 € kg−1. However, we consider that the weakfish sale price is underrated in comparison with other wild species (e.g., meagre, seabass, gilthead seabream). Increasing sale price will convince fishers to use weakfish as a new fishing resource; however, it is necessary to promote the species among consumers and evaluate consumers’ preference in respect to other species. A putative biological threat might turn into a new valuable fishing resource by implementing adequate management solutions. View Full-Text
Keywords: biological invasions; non-indigenous species; fish; introduction vectors; ballast water; fishing resource; Iberian Peninsula biological invasions; non-indigenous species; fish; introduction vectors; ballast water; fishing resource; Iberian Peninsula
►▼ Show Figures 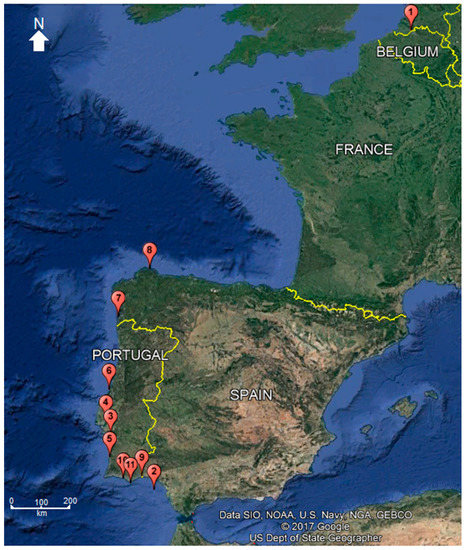