Differences in the Olfactory Sensitivity of Ceratitis capitata to Headspace of Some Host Plants in Relation to Sex, Mating Condition and Population

The Mediterranean fruit fly, Ceratitis capitata Wied., is among the most serious pests in horticulture worldwide, due to its high reproductive potential, difficulty of control and broad polyphagy. The aim of this study was to measure—by means of the electroantennogram recordings— the antennal olfactory sensitivity of virgin, mated, male, female, lab-reared and wild C. capitata following stimulation with fruit and leaf headspace of some host-plants: clementine, orange, prickly pear, lemon and apple. The results show that: (a) lab-reared mated males are more sensitive to host-plant fruit and leaf headspace than females, while the opposite was true for wild insects; (b) antennae of wild virgin males were more sensitive than the mated ones, while no difference was observed among lab-reared medflies; (c) lab-reared virgin females were more sensitive than mated ones, while few differences were found within wild medflies; (d) in mated insects, lab-reared males were more sensitive to both host-plant fruits and leaves than the wild ones, while the opposite was found for females. Taken together, these results show that the olfactory sensitivity to host-plant odors differs between virgin and mated and lab-reared and wild flies. View Full-Text
Keywords: olfaction; medfly; mating; sex; population olfaction; medfly; mating; sex; population
►▼ Show Figures 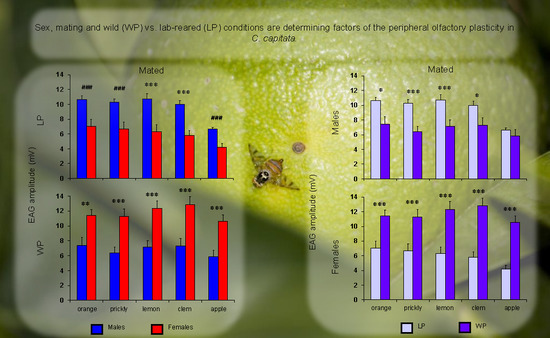