Dual specificity phosphatases (DUSPs) have a well-known role as regulators of the immune response through the modulation of mitogen-activated protein kinases (MAPKs). Yet the precise interplay between the various members of the DUSP family with protein kinases is not well understood. Recent multi-omics studies characterizing the transcriptomes and proteomes of immune cells have provided snapshots of molecular mechanisms underlying innate immune response in unprecedented detail. In this study, we focus on deciphering the interplay between members of the DUSP family with protein kinases in immune cells using publicly available omics datasets. Our analysis resulted in the identification of potential DUSP-mediated hub proteins including MAPK7, MAPK8, AURKA, and IGF1R. Furthermore, we analyzed the association of DUSP expression with TLR4 signaling and identified VEGF, FGFR, and SCF-KIT pathway modules to be regulated by the activation of TLR4 signaling. Finally, we identified several important kinases including LRRK2, MAPK8, and cyclin-dependent kinases as potential DUSP-mediated hubs in TLR4 signaling. The findings from this study have the potential to aid in the understanding of DUSP signaling in the context of innate immunity. Further, this will promote the development of therapeutic modalities for disorders with aberrant DUSP signaling. View Full-Text
Keywords: TLR signaling; hematopoietic cells; integrated omics analysis TLR signaling; hematopoietic cells; integrated omics analysis
►▼ Show Figures 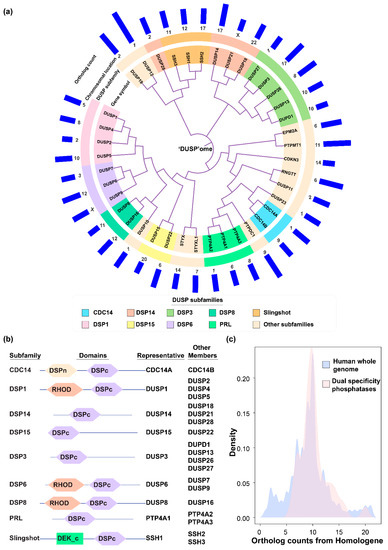