Curcumin: New Insights into an Ancient Ingredient against Cancer
Previous Article in Journal

Curcumin: A Potent Protectant against Esophageal and Gastric Disorders

Turmeric obtained from the rhizomes of Curcuma longa has been used in the prevention and treatment of many diseases since the ancient times. Curcumin is the principal polyphenol isolated from turmeric, which exhibits anti-inflammatory, antioxidant, antiapoptotic, antitumor, and antimetastatic activities. The existing evidence indicates that curcumin can exert a wide range of beneficial pleiotropic properties in the gastrointestinal tract, such as protection against reflux esophagitis, Barrett’s esophagus, and gastric mucosal damage induced by nonsteroidal anti-inflammatory drugs (NSAIDs) and necrotizing agents. The role of curcumin as an adjuvant in the treatment of a Helicobacter pylori infection in experimental animals and humans has recently been proposed. The evidence that this turmeric derivative inhibits the invasion and proliferation of gastric cancer cells is encouraging and warrants further experimental and clinical studies with newer formulations to support the inclusion of curcumin in cancer therapy regimens. This review was designed to analyze the existing data from in vitro and in vivo animal and human studies in order to highlight the mechanisms of therapeutic efficacy of curcumin in the protection and ulcer healing of the upper gastrointestinal tract, with a major focus on addressing the protection of the esophagus and stomach by this emerging compound. View Full-Text
Keywords: curcumin; reflux esophagitis; gastroprotection; gastric ulcer; Helicobacter pylori; gastric cancer curcumin; reflux esophagitis; gastroprotection; gastric ulcer; Helicobacter pylori; gastric cancer
►▼ Show Figures 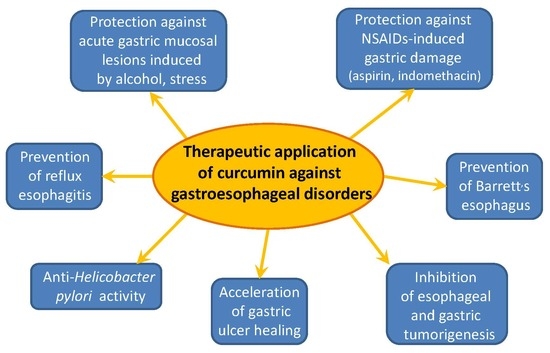