Curcumin: A Potent Protectant against Esophageal and Gastric Disorders
Previous Article in Journal

Ca2+ is a universal second messenger that plays a pivotal role in diverse signaling mechanisms in almost all life forms. Since the evolution of life from an aquatic to a terrestrial environment, Ca2+ signaling systems have expanded and diversified enormously. Although there are several Ca2+ sensing molecules found in a cell, EF-hand containing proteins play a principal role in calcium signaling event in plants. The major EF-hand containing proteins are calmodulins (CaMs), calmodulin like proteins (CMLs), calcineurin B-like (CBL) and calcium dependent protein kinases (CDPKs/CPKs). CaMs and CPKs contain calcium binding conserved D-x-D motifs in their EF-hands (one motif in each EF-hand) whereas CMLs contain a D-x3-D motif in the first and second EF-hands that bind the calcium ion. Calcium signaling proteins form a complex interactome network with their target proteins. The CMLs are the most primitive calcium binding proteins. During the course of evolution, CMLs are evolved into CaMs and subsequently the CaMs appear to have merged with protein kinase molecules to give rise to calcium dependent protein kinases with distinct and multiple new functions. Ca2+ signaling molecules have evolved in a lineage specific manner with several of the calcium signaling genes being lost in the monocot lineage. View Full-Text
Keywords: calmodulin; calmodulin-likes; calcium dependent protein kinases; calcineurin B-like; EF-hands calmodulin; calmodulin-likes; calcium dependent protein kinases; calcineurin B-like; EF-hands
►▼ Show Figures 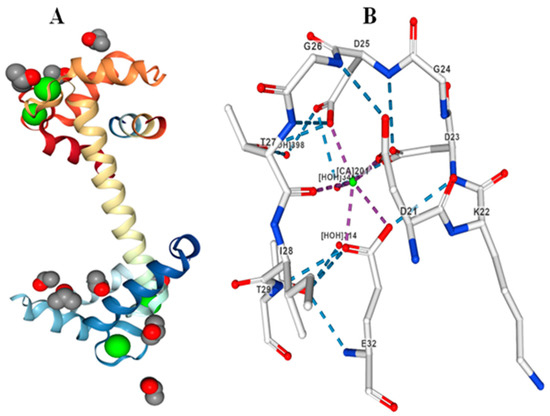