The aim of the study was to conduct phytochemical and pharmacological investigations of Wrightia coccinea (Roxb. ex Hornem.) Sims via several in vitro, in vivo, and in silico models. A total of four compounds were identified and isolated from the methanol extract of the bark and the methanol extract of the seed pulp of W. coccinea through successive chromatographic techniques and were characterized as 3β-acetyloxy-olean-12-en-28-ol (1), wrightiadione (2), 22β-hydroxylupeol (3), and β-sitosterol (4) by spectroscopic analysis. The aqueous fraction of the bark and chloroform fraction of the fruits provided the most potent antioxidant capacity (IC50 = 7.22 and 4.5 µg/mL, respectively) in DPPH free radical scavenging assay compared with the standard ascorbic acid (IC50 = 17.45 µg/mL). The methanol bark extract and the methanol fruit coat extract exerted anti-diarrheal activity by inhibiting 74.55 ± 0.67% and 77.78 ± 1.5% (mean ± SEM) of the diarrheal episode in mice, respectively, after four hours of loading the samples. In the hypoglycemic test, the methanol bark extract and the methanol fruit coat extract (400 mg/kg) produced a significant (p < 0.05) reduction in the blood glucose level in mice. Both doses of the plant extracts (200 mg/kg and 400 mg/kg) used in the study induced a significant (p < 0.05) increase in pain reaction time. The in vitro and in vivo findings were supported by the computational studies. The isolated compounds exhibited higher binding affinity compared with the standard drugs towards the active binding sites of glutathione reductase, epidermal growth factor receptor (EGFR), kappa opioid receptor, glucose transporter 3 (GLUT 3), Mu opioid receptor, and cyclooxygenase 2 (COX-2) proteins due to their potent antioxidant, cytotoxic, anti-diarrheal, hypoglycemic, and central and peripheral analgesic properties, respectively. The current findings concluded that W. coccinea might be a potential natural source for managing oxidative stress, diarrhea, hyperglycemia, and pain. Further studies are warranted for extensively phytochemical screening and establishing exact mechanisms of action. View Full-Text
Keywords: Wrightia coccinea; antioxidant; cytotoxic; anti-diarrheal; hypoglycemic; analgesic; molecular docking Wrightia coccinea; antioxidant; cytotoxic; anti-diarrheal; hypoglycemic; analgesic; molecular docking
►▼ Show Figures 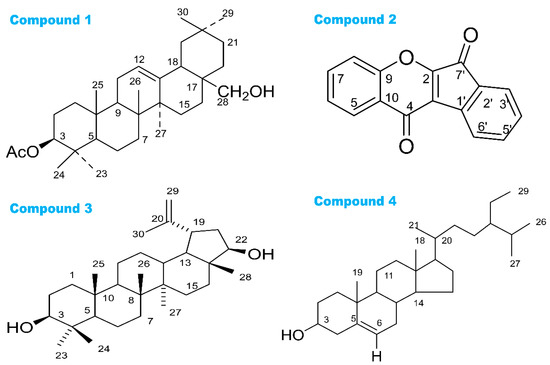