Colorectal cancer (CRC) is the third most common type of cancer and the second most common cause of cancer-related death in the world. N-Butylidenephthalide (BP), a natural compound, inhibits several cancers, such as hepatoma, brain tumor and colon cancer. However, due to the unstable structure, the activity of BP is quickly lost after dissolution in an aqueous solution. A polycationic liposomal polyethylenimine and polyethylene glycol complex (LPPC), a new drug carrier, encapsulates both hydrophobic and hydrophilic compounds, maintains the activity of the compound, and increases uptake of cancer cells. The purpose of this study is to investigate the antitumor effects and protection of BP encapsulated in LPPC in CRC cells. The LPPC encapsulation protected BP activity, increased the cytotoxicity of BP and enhanced cell uptake through clathrin-mediated endocytosis. Moreover, the BP/LPPC-regulated the expression of the p21 protein and cell cycle-related proteins (CDK4, Cyclin B1 and Cyclin D1), resulting in an increase in the population of cells in the G0/G1 and subG1 phases. BP/LPPC induced cell apoptosis by activating the extrinsic (Fas, Fas-L and Caspase-8) and intrinsic (Bax and Caspase-9) apoptosis pathways. Additionally, BP/LPPC combined with 5-FU synergistically inhibited the growth of HT-29 cells. In conclusion, LPPC enhanced the antitumor activity and cellular uptake of BP, and the BP/LPPC complex induced cell cycle arrest and apoptosis, thereby causing death. These findings suggest the putative use of BP/LPPC as an adjuvant cytotoxic agent for colorectal cancer. View Full-Text
Keywords: N-butylidenephthalide; LPPC nanoparticle; colorectal cancer; antitumor; cytotoxicity N-butylidenephthalide; LPPC nanoparticle; colorectal cancer; antitumor; cytotoxicity
►▼ Show Figures 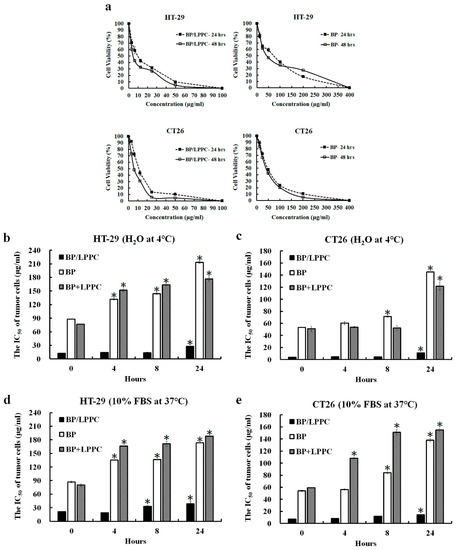